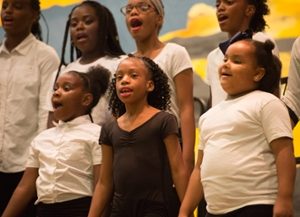 Students, ages 6-17, performed a variety of musical, dance and acting numbers during the SIUE East St. Louis Center’s End of the Summer Concert on July 14. (Photos courtesy of SIUE)

“Teaching this summer has been wonderful,” said Mary Jo Pembrook, Ph.D., piano/chimes instructor. “The students have learned a lot. They were eager to learn something new, like how to play the chimes, and were committed to practicing, practicing and practicing.”

The show was made possible because of the partnership with East St. Louis School District #189, which donated the use of its Katherine Dunham Performing Arts Auditorium at the East St. Louis High School, said ESLC Executive Director Jesse Dixon.

“I also want to thank Jack Williams for his ongoing support to the Performing Arts Program and the ESLC,” Dixon said. “This is Jack’s 33rd year with Performing Arts.”

“The show was a little different this year,” said Williams, Performing Arts program director. “We added a chimes hand bell choir, an acoustic guitar and even a little acting. We honored such legends as Whitney Houston, Aretha Franklin, James Brown, the Temptations and Muhammad Ali. Our program continues to bring the Arts and African American culture to young people in the Metro East area, and by doing so, we have reached thousands of people and impacted lives across the country.”

Welcoming the crowd was Eugene B. Redmond, PhD, SIUE emeritus professor in the Department of English Language and Literature and Poet Laureate of East St. Louis. “Katherine Dunham always said that the function of art is to bring people closer together, and it continues to do so,” Redmond said.

The performance began with the musical number, “I’ll Be There,” by The Jackson 5 and included such other hits as “Hills and Valleys” by Tauren Wells, under the direction of Michael Thigpen. 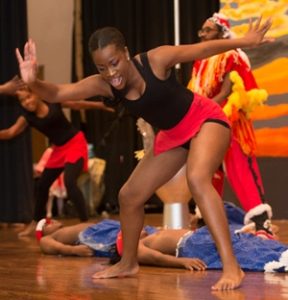 Students showed off some of their acting and dancing skills in the session of “Feather of Iron,” choreographed by Gerald Babatunde’ Sylla Williams, Performing Arts instructor and drummer.

Some dance moves that the students performed throughout the show included: West African, contemporary jazz, contemporary ballet, hip-hop and modern.

“In our Performing Arts program, students learn technique, confidence, coordination, how to be part of a team, persistence,” Dixon said, “and most importantly, a sense of pride and identity, and why their culture is important. There is no class a student can take for six weeks that can do all that, while moving the audience in such a powerful way.”

The ESLC Performing Arts Summer Enrichment Program was made possible, in part, because of the generous contributions of the Gateway Chapter of the Links, the Illinois Arts and Education Council, and PNC Bank.

With a focus on empowering people and strengthening communities, the SIUE East St. Louis Center is dedicated to improving the lives of families and individuals – from pre-school through adult – in the Metro East. Head Start/Early Head Start and a charter high school are among the programs that offer the community renewed hope and an opportunity to reach educational, career and life goals. The Center also assigns first priority to encouraging, supporting and improving the educational success of the residents of East St. Louis and surrounding urban communities. The Center provides comprehensive programs, services and training in the areas of education, health, social services and the arts.