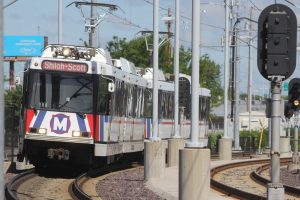 Calls for improving security on MetroLink service came in the wake of violent attacks that occurred in the first few months of the year. (Photo courtesy of metrostlouis.org)

The call for greater security comes in the wake of a series of violent incidents at MetroLink stations over recent months.

It also comes as Bi-State is attempting to expand its footprint in Metro East, including possible expansion into Madison County.

Kern launched the joint effort for better MetroLink security with an April 7 open letter to Bi-State, criticizing security on the light rail line.

“Unfortunately, recent events have exacerbated what has been a deteriorating security condition on MetroLink,” Kern said in a news release. “Our investment in this critical public infrastructure must be maintained, but most importantly the citizens of St. Clair County must have faith in the safety of the entire MetroLink operation in Illinois and Missouri.”

On April 10, Kern, Stenger and then-outgoing St. Louis Mayor Francis Slay met with John Nations, president and chief executive officer of Bi-State Development, to say that, due to inaction by the agency to address security issues, they would be proposing a security plan for the light rail system.

Kern, Stenger, and Krewson then followed up with a draft security proposal, submitted to Nations during a 90-minute, closed-door meeting, April 13.

The draft security plan calls for Bi-State to ensure a substantially increased number of police officers on MetroLink trains and at boarding stations. 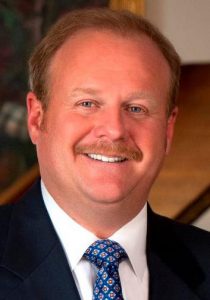 Bi-State officials quietly acknowledge that, currently, they do not have security guards on most trains or at most boarding platforms; relying instead on the St. Clair County Sheriff’s Department, St. Louis County Police Department and the St. Louis Police Department to patrol them.

Kern, Stenger and Krewson have not indicated publicly whether they are calling on Bi-State to establishing its own dedicated, transit system police force or reimburse area governments for increased police coverage.

The three have not specified publicly exactly how many additional police officers they feel will be needed to adequately patrol the MetroLink system or how much that extra security might cost.

In addition to additional security personnel, Kern, Krewson and Stenger are demanding Bi-State establish a system of turnstiles at MetroLink stations to help ensure that only persons who have purchased tickets or boarding passes can enter trains or boarding platforms.

Bi-State officials say they now rely mostly on an honor system to ensure passengers pay fares.  However, they acknowledge that currently about ten percent of system riders are riding the trains free. And critics say the lack of turnstiles and ticket collection has made it too easy for criminals and youth gangs to enter the trains and boarding stations.

Concerns over MetroLink security began to escalate in December 2015 when a rider was severely beaten and robbed onboard a crowded MetroLink train at the rails system’s St. Charles Rock Road station in north St. Louis County.

In March of this year, a homeless man was shot and killed at the Busch Stadium MetroLink platform  in the City of St. Louis.

This month, a man was shot and killed at the University of Missouri-St. Louis MetroLink stop in north St. Louis and a 38-year-old East St. Louis man was charged after an incident at the line’s Fairview Heights station.

Bi-State officials have yet to publicly comment on the security proposal. Kern, Krewson and Stenger have not specified a deadline for its implementation nor have they indicated what they intend to do if Bi-State does not implement the security plan or all of its elements.

However, all three sit on the board of directors of the East-West Gateway Council of Governments (EWGCG) – the federally-recognized regional planning entity which has authority to approve – or reject – Bi-States annual requests for federal funding. Kern is EWGCG’s vice-chair and Stenger, its second vice-chair.