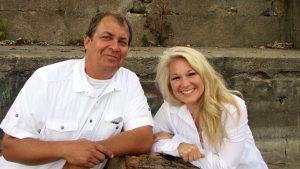 Brad and Robin Bannister created the nonprofit Drew’s Plots in Chillicothe to help others with burial costs after an anonymous donor paid for their oldest son Drew’s burial plot when he died in 2013. The organization’s annual all-day fundraiser, Spring Loose, takes place Saturday, April 6, at Three Sisters Park. (Photo courtesy of the Bannister family)

As Brad and Robin Bannister gather raffle items, recruit volunteers and tend to the myriad details required to host the sixth annual Spring Loose fundraiser to benefit Drew’s Plots, their oldest son is never far from their minds.

The Bannisters formed the nonprofit organization in memory of their son, Drew Bannister, who died at 28 in a car accident on March 13, 2013, in Florida. After an anonymous donor paid for their son’s burial plot, the family felt called to do the same for others.

Spring Loose, a fun-filled day with nonstop activities for all ages, is the organization’s main fundraiser that allows Drew’s Plots to provide burial plots and interment services on a case-by-case basis for those who find themselves in need. It takes place this year from 2 to 10 p.m. Saturday, April, 6, at Three Sisters Park, located near Illinois Route 29 between Peoria and Chillicothe. A $5 donation is suggested but not required.

“I think Drew would love the fact that his family and friends all get together for this. And he loved any time he could drink beer and sit around a bonfire and listen to music,” Robin said with a catch in her voice but also a smile.

“The event has grown quite a bit since we started it,” added Brad Bannister. “Every year we add something new or change it a little bit. Last year we increased by 15 percent on what we raised. Normally, I think (fundraisers) kind of plateau, but we haven’t reached that yet.”

Last year’s event raised about $15,000 between donations at the door, T-shirt and food sales and a raffle. “We usually have upwards of 200 raffle items. The raffle is our biggest moneymaker,” Brad said. 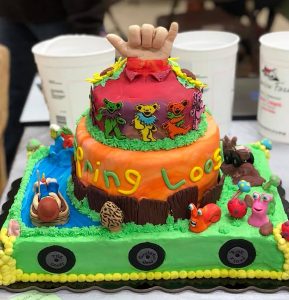 Becky Pulst created this cake featuring things the late Drew Bannister loved for last year’s Spring Loose fundraising raffle. About 200 baskets will be offered in this year’s raffle on April 6 at Spring Loose, which also features a disc golf tournament, live art demonstrations, live music and a bonfire at Three Sisters Park in Chillicothe. (Photo courtesy of the Bannister family)

The event will include a kids’ area with face painting, a tie-dye station and raffles just for kids; live music by local bands; food and drink for sale, including hot dogs, barbecue and fried baloney sandwiches (no outside food or drink is allowed); Knockerball; and what’s billed as the world’s largest cake walk.

“Three years ago (Robin) said she wanted to have a cake walk. I laughed at her and said it won’t work. The next year we had over 250 people in three big circles in the main building doing the cake walk, so I had to say I was wrong,” Brad said with a chuckle.

He’s hoping one day to entice the Illinois Valley Central High School’s business and food classes to take on the challenge of getting the cake walk into the Guinness Book of World Records. “There are a lot of hoops you have to jump through for that, so I’d like to let (the students) run it and do all the leg work to get that on record,” Brad said.

About 75 cakes, all donated, were given away during last year’s cake walk. Asked why it’s so popular, Robin shrugged and said, “Everybody loves cake.”

One cake intended for the cake walk last year ended up in the raffle instead. Becky Pulst, whose family was a recipient of Drew’s Plots’ help when they lost her mother, made a cake featuring things Drew loved, such as hunting mushrooms, Grateful Dead music, fishing and the hang loose sign. Pulst also hid a $100 bill inside the cake. 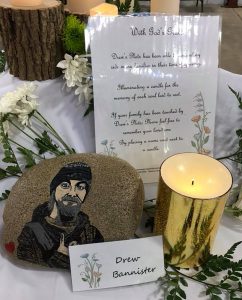 A painting of the late Drew Bannister is part of a memorial table at last year’s Spring Loose fundraiser to benefit Drew’s Plots, a nonprofit Bannister’s family organized after his death to help other families with burial or interment costs when tragedy strikes. (Photo courtesy of the Bannister family)

“It was so special,” Robin said. “That was just her way of giving back.”

New this year is a disc golf tournament at the park presented by the Peoria Frisbee club. Registration for the tournament can be made in advance online at www.discgolfscene.com/tournaments/Drews_Plots_Doubles_Fundraiser_2019. Check-in begins at 8 a.m. and players will tee off beginning at 9:30 a.m. The tournament features several divisions based on age and experience with a $50 entrance fee.

Returning to Spring Loose this year are Prop Chaos drone racing and a rock hunt sponsored by WTP Rocks, a “kindness rock” movement that founder Lloye Pond said fits right in with the kindness mission of Drew’s Plots.

WTP Rocks volunteers will hide hundreds of painted rocks throughout the Three Sisters Park property for anyone to find between 2 and 5 p.m. Volunteers will also be on hand to help people paint rocks during the fundraiser and will sponsor a rock swap at 5:30 p.m.

“People can submit rocks to the swap between 2 and 5 p.m. Then at 5:30 p.m. they return to the table and will be given a paper sack in exchange for a ticket they received when they submitted rocks,” said Pond, a longtime friend of Robin Bannister’s.

Another new aspect of this year’s event is an increase in the number of artists who will be creating live art, Brad said. 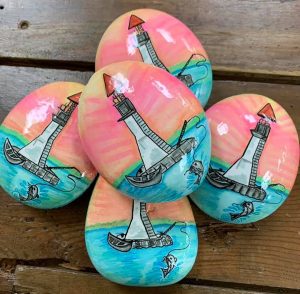 Hundreds of painted rocks similar to these will be hidden by volunteers with WTP Rocks on the grounds at Three Sisters Park for people to find during the annual family-friendly Spring Loose to benefit Drew’s Plots on April 6. (Photo courtesy of WTP Rocks)

Local woodcarver Tim Gill will use a chainsaw to carve a work of art during the event, and Ryan Fogerty of Fogtz Glass will demonstrate the art of glass blowing.

“We’ve also got fire spinners and jugglers, painters, a potter, antler art and flint-knapping,” Brad said. “We don’t ever want to turn it into a vendor or a craft show, but we want to continually increase the live arts part of it for people to see. We just ask that each artist donate a piece or two for the raffle.”

The Bannisters credit the entire community with helping make Spring Loose possible through various donations and support. The family looks to a Bible verse, Galatians 6:2, which states “Bear ye one another’s burdens and so fulfill the law of Christ,” for inspiration.

“Spring Loose is a very special time for us,” Robin said. “It’s chaotic, but it gives us a chance to hug on Drew’s friends, and I love hearing some of the Drew stories. We hope everyone will come out for the day.”