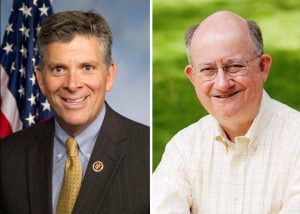 In the end, however, a region of the state long known for leaning red stayed that very color when the polls closed Nov. 8 on election day.

According to unofficial results, Democratic candidate Rodriguez of Eureka garnered about 28 percent of the total vote. His opponent, incumbent Darin LaHood, R-Dunlap, earned the balance of the 72 percent of votes cast.

The voters’ decision means LaHood is heading into his first full term in office. Last year, in a special election, LaHood was chosen to fill the remainder of the term left by prior disgraced seat-holder Aaron Schock, who is now under federal indictment.

Throughout this year’s campaign season, Rodriguez took aim at the tarnished reputation of the 18th District, pointing to Schock, a Republican, and his actions. Two days after the election, a grand jury indicted Schock on 24 counts of making false statements, wire fraud and theft of government funds.

But LaHood frequently trumpeted his virtues and platform, all the while distancing himself from his predecessor.

In a statement issued election night, LaHood thanked his constituents for their majority support.

“I look forward to getting back to work in Washington, D.C., for a full term to represent Central and West Central Illinois on the issues and priorities that we are facing here at home,” LaHood said.

Mirroring the head-to-head presidential race between Republican Donald Trump and Democrat Hillary Clinton, LaHood and Rodriguez were frequently at odds — sometimes on issues that were not directly related to policy. Rodriguez, for instance, frequently called on LaHood to denounce Trump as the now elected president made comments on the campaign trail.

Noting the divisiveness of this campaign season, LaHood said he is hoping to do his part toward building unity.

“With this election behind us, I believe we have a chance to stand united, going forward,” LaHood said. “I remain committed to finding common ground on priorities that encourage a growing economy and support our hard working families, farmers, small business owners, tradesmen and those men and women who protect our communities.”

Rodriguez, who issued a number of comprehensive policy positions in the months leading up to the election, was stoic about the results and said he had no regrets of throwing his hat into the ring during this especially shrill campaign season.

“Six months ago, my campaign for U.S. Congress began as what I then described as ‘an insurgency of one,’ believing that we could do better and have more effective representation,” Rodriguez said, pointing to the 95,474 voters who had a similar sentiment.

Noting the historically Republican-leaning tendencies of the 18th District, Rodriguez said the support he was able to garner was “a tremendous accomplishment for a brief, six-month campaign.”

“Unfortunately, it was not enough — at least, not this time,” Rodriguez said. “Although we did not achieve the outcome for which we had hoped … I am proud of the type of issues-based campaign that we waged.”

Although he was a frequent critic of LaHood this campaign season, Rodriguez said he openly congratulated his opponent on his victory and pledged to offer his services in any way possible.

Speaking to his congratulatory call to LaHood on election night, Rodriguez said, “I urged him to continue his work on the Congress of Tomorrow initiative that is aimed at improving the climate of bipartisanship in the U.S. Congress.”

Speaking to the conversation with LaHood, Rodriguez said, “He was gracious in his response.”