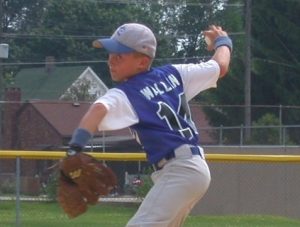 Thirty-nine youth baseball fields from Peoria to Lacon and points in between were alive last weekend with the crack —or ping — of the bat, the smack of the ball and glove, and the gleeful shouts of boys participating in the 15th annual St. Jude Brad Wallin Memorial Tournament May 29-June 2.

The five-day tournament, which honors the life of a baseball loving Chillicothe youth who succumbed to osteosarcoma, a rare form of childhood bone cancer, brought over 340 teams of ballplayers and their families to the greater Peoria area to participate in more than 700 ball games.

The history of the tournament, which began at the Rome, Illinois youth fields in 2005 with 10 teams and the goal of raising a few dollars for the St. Jude Research Hospital, is both tragic and inspiring.

During this and past tournaments, many of the teams who travel to play in the area make time to stop by Chillicothe Cemetery, where Brad Wallin was laid to rest at age 11 in 2004, and pay their respects.

Wallin’s love for the game of baseball is reflected by his home-plate and ball bat-shaped tombstone, which is adorned each June with personalized baseball-related offerings left by the teams who visit there. The gravesite serves as a visual focal point and venue for the boys to learn about the true reason for the tournament, and to bring home the reality that playing the game baseball– just as with life itself– is a privilege that should be enjoyed, appreciated and never taken for granted. 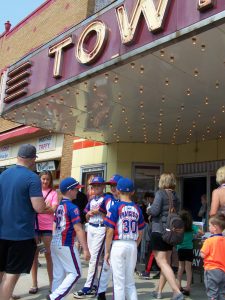 CAPTION: Members of the Rivercats youth baseball team from Minooka, Ill. gather in front of Chillicothe Town Theater in advance of a screening of the short film “Safe at Home,” the Brad Wallin story. The youth were among some 345 teams present in the area for the 15th annual Brad Wallin Memorial Tournament for St. Jude Children’s Hospital, which honors the life of a young cancer victim who loved baseball. (Photo by Tim Alexander / for Chronicle Media)

The 2019 BWMT offered a new and more descriptive venue for youth to learn more about the boy whose life inspires the tournament, which has now raised millions of dollars for St. Jude: the unofficial debut of the independently-produced, 35-minute documentary “Safe at Home: A Brad Wallin Story.”

The poignant and bittersweet short film was shown 52 times at Chillicothe’s historic Town Theater during the May 27-June 2 tournament, with hundreds of uniformed ballplayers, coaches, and their families passing through the theater’s doors to attend the advance screenings (exact attendance figures were not available at press time).

After checking in with a BWMT volunteer at a folding table set up outside the theater, Minooka Rivercats manager Sean Mackin handed out admission lanyards to his squad of age 10-and-under boys awaiting a Saturday morning screening.

Mackin said that after three years of participation, parents and players for the team thought it was time to spend more time learning about the tournament’s mission and origins. The movie provided the ideal platform to begin to fulfill their knowledge quest.

“We went to the gravesite and read everything about Brad that is written on his tombstone, and now we are attending the movie. We wanted the kids to know what this is all about and make sure they knew that they are now doing something that (Brad) is no longer able to do, and there are a whole lot of other kids in the same situation. We wanted them to know they are blessed they are to be able to play baseball,” said Mackin. “Now we want them to see the movie for the rest of the story.”

The movie would serve as a profound message board for the youth to learn that there are more important pursuits and causes to consider in life other than baseball and sports, Mackin predicted.

Inside, the team huddled together, munching on buttered popcorn and snacks, while the story of Brad Wallin played itself out on the screen.

The movie laid bare for the boys how on October of 2003, when Brad Wallin was just 10, the lives of Jeff and Lori Wallin and their family were turned upside down when it was discovered that Brad had acquired a rare form of bone cancer.

In his own words, Jeff Wallin details how, after a 41-week chemotherapy regimen, numerous hospital stays and a leg amputation, the cancer metastasized in his son’s lungs. Brad Wallin passed away after spending one last night “safe at home” in the loving comfort of his parents and doting big sister.

In addition to chronicling the life and death of Brad Wallin, and the love for the game of baseball and life he exhibited, the film offers a delightful glimpse at behind-the-scenes preparation and execution of the tournament, which benefits from hundreds of local volunteers and community business support.

Drone footage of the Illinois River Valley, area baseball parks and other landmarks, such as the century-old Chillicothe Shore Acres Park clubhouse, is interspersed with actual footage from the 2018 BWMT and inspirational player-coach interaction.

In one scene, Jeff Wallin is seen speaking to a Chillicothe youth team in advance of a tournament game at Big Gotch Field. He tells the boys that there will be a tenth player on the field with them that night once play begins. “You can believe that Brad will be right out there along with you,” Brad’s father says.

Strategically-placed boxes of Kleenex tissue were placed near theater exits for the benefit of those whose emotions spilled over.  After one screening, Ryan Stange, manager of the Henry, Illinois 8-U team, praised the emotional strength of the Wallin family and called the opportunity to screen the movie with his team a memorable experience.

“This is the first year for my eight year-old to play and I really think he has a new respect for how privileged he is to get to play baseball,” said Stange. “He can get down on himself when the team loses and that movie teaches the kids that it is not about winning or losing, it is about how you play the game. I recommend this movie to all first-year Brad Wallin Tournament participants.”

Jeff and Lori Wallin made several appearances during the screenings, interacting with players, parents and coaches and speaking generously about their experience with the filmmakers of TheBand.co, the company that produced the film.

“Lori and I had a very hands-on experience in the making of the film,” Jeff Wallin said. “I guess they are calling us associate producers, but it was really a team effort. They were here 10 days last year during the tournament and we really got to know them. They are more than the filmmakers to us, they have become family.”

An unnamed “local connection” put the Wallins in contact with the filmmakers, who are based in Colorado and California. This local connection prefers to remain out of the limelight, but “people will know. They do know,” Wallin said. “It’s a dear friend and a St. Jude family.”

He also explained how the movie got its name. “Brad lived, loved and dreamed his goal of becoming a professional baseball player. The movie’s title is related to baseball, number one, and it’s also related to higher meanings. The back of his tombstone says it best: number 14, safe at home, and we will see you soon,” Wallin said.

Wallin was amazed at the turnout for the film through Saturday evening, when shows were at capacity as teams and locals lined up for one of the prized lanyards.

“It means that Brad’s legacy is doing what we wanted it to do. It’s touching people, it’s touching lives, it’s enriching lives and it’s letting people know that there is more to life, and more to winning and losing, than what is on the baseball field. You have to live life and do your best and live for today, because you don’t know what’s coming tomorrow.”

Jeff Wallin hinted that the featurette represents what actually is just a portion of the entire Brad Wallin story.

“There is a lot more of this story to be told. Once the (short film) runs its course, our hope is the full story can be told. From here, this will go to film festivals. If it gets picked up, our goal is to tell the whole story, so we will see where it goes,” he said.

On Sunday, June 2, winning teams in eight different age divisions (8-and-under to 15-and-under) were escorted into the winner’s circle at select field locations to receive recognition honoring their BWMT accomplishments.

When the boys left town, in addition to their trophies, those who saw “Safe at Home” also left with a newfound appreciation for the game of life.

(For more about the Brad Wallin Memorial Tournament and “Safe at Home,” visit www.bradwallintourney.com.)