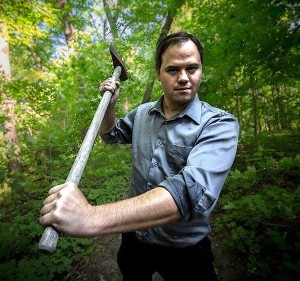 Peoria author Joe Chianakas strikes a pose out of a horror film while promoting his first book, a horror-themed novel titled “Rabbit in Red.”
(Photo by Mark Nycz)

Joe Chianakas spent many hours as a youth glued to books by R.L. Stine and the like, wishing he might someday be able to completely captivate readers that way.

That day may well have come for the 36-year-old Illinois Central College professor. His first horror novel, “Rabbit in Red,” has been receiving positive reviews since its digital release last month.

The print version will be available by Saturday, Oct. 17.

People are encouraged to dress as their favorite horror character for a chance to win prizes, and the pop-punk band Terribly Happy will perform “Enter the Rabbit,” which they co-wrote with Chianakas to complement the book. Comprised of current and former ICC students, the band actually had a goal of writing a horror-themed album before Chianakas reached out to them.

“They’re a fantastic, talented bunch of kids,” Chianakas said. “I wrote the lyrics, and they put together this haunting, adrenaline-pumping song. We used a snippet of it on the “Rabbit in Red” trailer.”

The band was equally impressed with Chianakas’ book and excited by the opportunity to collaborate.

“We had always wanted to make a horror-themed punk rock/pop-punk song, being horror buffs ourselves. This collaboration presented an amazing opportunity not only to do that, but also to help promote something we all found truly incredibly,” said drummer Logan Kiesewetter. Other band members are Kyle Hamon and James Wylie, who both sing and play guitar.

Kiesewetter is a 2011 graduate of Metamora Township High School, where Chianakas taught English for 10 years before moving on to teach communications at ICC five years ago. Kiesewetter described “Rabbit in Red” as “an absolutely mind-blowing horror-adventure tale (that) combines coming-of-age with horror.”

The novel centers around two high school seniors, Bill and Jaime, both obsessed with scary films and books as a result of real-life horror each has suffered in the past.

The two friends enter a contest hosted by an eccentric horror movie producer, Jay “JB” Bell, at his Rabbit in Red Studios, where they compete against other teens for cash and a coveted movie studio internship.

Calling it a “terror-filled, blood-drenched contest,” Chianakas notes that “things aren’t always as they seem at Rabbit in Red, and soon life starts to imitate art. Will Bill and Jaime be strong enough to confront real horror to save their friends, or will they all fall victim to JB’s twisted plans?”

Chianakas took inspiration for part of his novel from the fear that gripped Peoria during a series of home invasions during the summer of 2013.

“On the fun side of things, this is my tribute to horror pop culture,” Chianakas said. “I was really hoping that other fans like me would totally geek out and love it, too. On other hand, I of course wanted to play with the dark side and talk about fear, so when I was trying to think about what scared me, the stories about all those home invasions were stuck in my consciousness I guess.”

Written for older teens and adults, “Rabbit in Red” is the first in what will be a three-part series and was published by Distinguished Press, a small Illinois-based publishing company.

“Finding a publisher was very hard. It’s one of those things that could be really easy, depending on what you’re shooting for. Anyone can self-publish, but if you’re shooting for as big as you can possibly go, it can be very stressful and challenging,” Chianakas said.

He estimated receiving at least a dozen rejection letters, not counting the publishers and agents who didn’t respond at all.

“My favorite rejection was from someone who worked with literary agencies but also film and television. She said she almost considered pitching it for a television series to the CW network. That gave me hope that there was something there, but it needed a rewrite,” Chianakas said.

While it scares him and thrills him at the same time, Chianakas has been checking reviews and sales figures on Amazon almost daily.

“We did really well last week. I was ahead of (author) Peter Straub for a day. My book was number 20-something on hot new horror releases, and Peter Straub’s new book was right under me. That only lasted for a day or two, but while it lasted it was the coolest thing ever,” he said.

Chianakas plans to keep writing but said he’ll keep teaching, too. He was the 2015 recipient of ICC’s Gallion Award, the highest student-nominated teaching honor for full-time faculty members.

He has several promotional events scheduled, including a book reading and signing from 6 to 10 p.m. Oct. 21 at Lit on Fire Books, 929 N. Sheridan Road, in Peoria; a reading, discussion and signing at 2:30 p.m. Oct. 27 at the ICC East Peoria campus library; and a book fair Nov. 15 at the Peoria Public Library. “Rabbit in Red” has also been chosen as a library book club selection for 2016.

“Rabbit in Red” is available online through Amazon, Barnes & Noble and other major booksellers. For more information, visit the website www.joechianakas.com.