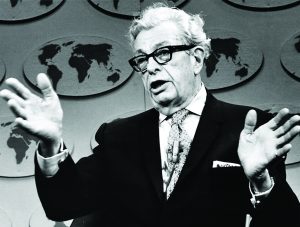 The late Sen. Everett McKinley Dirksen of Pekin would likely be baffled and concerned by the election of President Donald Trump and today’s rancorous political climate but would have faith in the government’s system of checks and balances, according to local historian and Dirksen scholar Frank Mackaman. (Photo courtesy of the Dirksen Congressional Center)

The late Illinois Sen. Everett McKinley Dirksen, a Pekin native who spent 34 years on Capitol Hill during some tumultuous times, would likely be concerned about today’s rancorous political climate but not fearful.

“He would look askance at it and be discouraged by it in the short-term. In the long-term, he was an optimist,” said Frank Mackaman, a local historian and long-time staff member of the Dirksen Congressional Center in Pekin.

“One of Dirksen’s favorite quotes, and I’m probably paraphrasing this, is: ‘American democracy is like a water-logged scow. It moves slowly, it doesn’t change direction very quickly, but it never sinks,’ ” added Mackaman, who holds a doctorate in American history from the University of Missouri at Columbia.

Dirksen represented Illinois in the House of Representatives from 1933 to 1949 and the Senate from 1951 to 1969. The Senate minority leader for 10 years, he helped write and pass the Civil Rights Act and served during the Vietnam War.

“When I watch television punditry and there are all these exclamations about how this is unprecedented today and just out of the bounds of imagination, I’m reminded that’s not true,” Mackaman said. “I think the country was in worse shape and was more fractured in the 1960s as a result of the Civil Rights movement and the Vietnam War, and our institutions were strong enough and resilient enough to adapt.”

Mackaman concedes, however, that there is a card in play today that Dirksen and his colleagues never fathomed.

“The wild card this time is the 24-hour news cycle and social media,” he said. “I can’t figure out what that augurs for our future, but I’m less alarmist than many folks are about the current situation. The way I put it is the next four years will test the genius of the founding fathers.” 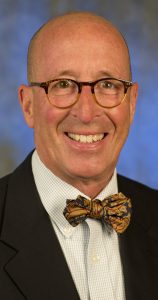 Mackaman has headed up the Dirksen Congressional Research Center for almost as many years as Dirksen served in Congress. He started at the center in 1976 right out of graduate school, left in 1987 to work as curator and deputy director and later as director of the Gerald R. Ford Library in Michigan and returned to the Dirksen Center in 1995.

Since last October Mackaman has been working remotely part-time from his home in Arizona, returning to Pekin for Dirksen Center business for one week each month. Another staff member, Cindy Koeppel, works remotely from her home in Washington State, primarily dealing with website issues. Office manager Lynn Kasinger works part-time as the center’s office manager.

Chartered in 1963, the Dirksen Center is a nonpartisan, nonprofit, private foundation located at 2815 Broadway Road. It has an endowment fund and receives no tax support. The 5,373-square-foot-building houses  materials associated with Dirksen’s public service, as well as items related to Bob Michel and Ray LaHood, who also represented the Peoria area in the U.S. House of Representatives.

“As a private nonprofit organization not affiliated with a parent organization such as a college or university or state historical society, the Dirksen Center is unique. Our objective is to improve the public understanding of Congress, the people who serve there, the processes involved in Congressional action and the policies Congress produces,” Mackaman said.

One way the Center does that is by investing in research about Congress. “We’ve given over a million dollars in small grants to over 460 research projects,” Mackaman said.

Much of the Center’s collection has been digitized, so about 90 percent of the research is done online. “We have an international reach. Most of our programming is accessed by people all over the world, primarily of course in the United States. We have a monthly e-newsletter with 45,000 subscribers worldwide,” he noted.

The Dirksen Center also offers lesson plans targeted at fourth grade and above that incorporate its historical materials to teach larger lessons about the role of Congress in American life. Pekin teachers occasionally schedule field trips to the Center. 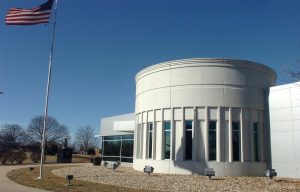 The Dirksen Congressional Center on Broadway Road in Pekin is a nonpartisan, nonprofit research and educational institution whose mission is to help people better understand the U.S. Congress and its leaders. (Photo by Elise Zwicky / for Chronicle Media)

“We don’t have a museum function, but we have one of Dirksen’s desks on display with some items from his collection,” Mackaman said. “The first time we did (a field trip), there were two items on his desk that the students didn’t know what they were. One was a typewriter and one was an ashtray.”

Asked what Sen. Dirksen, a Republican, would think of Donald Trump, Mackaman said, “I think he would be baffled that someone like Donald Trump would be elected president. And then he would be concerned. Because Dirksen understood perfectly the role of political institutions in our lives and had deep respect for that and got along well with other people who disagreed with him philosophically or politically or ideologically but shared with him faith in the institutions.”

One thing that would set Dirksen apart from many politicians today was his refusal to engage in personal attacks, Mackaman added. “Dirksen was every bit a partisan. It’s not that he rolled over to the opposition party or didn’t have strenuous disagreements with them, but they were conducted in a different (more respectful) tone than we’re seeing today.”

Despite the apparent chaos of President Trump’s first few weeks in office, Mackaman  believes Sen. Dirksen would still have faith in the government’s system of checks and balances.

“I think he would put his trust in the three co-equal branches of government,” Mackaman said. “Dirksen was a student of history so he was well aware of the antecedents to what we’re experiencing today, whether it’s the Jacksonian period, the Civil War or the horrific world wars. So he would take his optimism from history, believing that the country had endured every bit as traumatic episodes as we think we’re experiencing today. Although, again, the wild card today is social media and communication.”

For more information about the Dirksen Congressional Research Center, visit its website at www.dirksencenter.org.