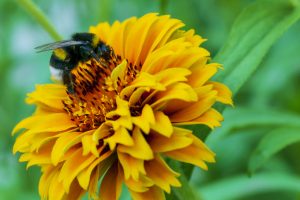 The Peoria Park District presents a program on bees and pollinators at Tawny Oaks Field Station on Saturday, Aug.3.

The Peoria Park District is holding a program on identification of native bees and other insect pollinators at the Tawny Oaks Field Station, 715 W Singing Woods Road, in Edelstein on Saturday, Aug. 3 from 10 a.m. to 2 p.m.

There is no fee for this program.

Both classroom and field sessions will be given by U.S. Fish and Wildlife Service, Illinois Nature Preserve Commission and Peoria Park District staff on how to identify, photograph, monitor and provide habitat for native insect pollinators.  Lunch is included.

This program is offered as an opportunity to learn about  the endangered Rusty Patch Bumble Bee and what is being done to protect it from extinction.

For more information, contact Mike Miller at 309-681-2858 or by mmiller@peoriaparks.org.

Dru Hill and The Brian McKnight 4 will be headlining the 2019 River City Soul Fest on the Peoria Riverfront.

All voice parts are welcome. Weekly rehearsals will be held on Tuesday evenings from 7 to 9  p.m. and will begin on Tuesday, Aug. 20. To schedule an audition, contact pacchorale@gmail.com or call 309-693-6725.

Young singers in grades 4-8 with unchanged voices are welcome to audition for the Youth Chorus’ fall season on Tuesday, Aug. 20 from 5 to 8 p.m. at the First United Methodist Church, 116 NE Perry Ave., in Peoria. Weekly rehearsals will be held on Tuesday evenings from 4:30 to 6  p.m. at FUMC and will start on Tuesday, Aug.27.

The Prep Chorus also will join the Youth Chorus at its fall concert. Rehearsals will be held on Tuesday evenings from 4:30-5:45 p.m. and will run Aug. 27-Oct. 22 at the First United Methodist Church in Peoria. To express interest in enrolling, email paccycprepchorus@gmail.com.

For more information about these ensembles, see www.peoriacivicchorale.org.

One man killed, one wounded in shootings

Jaware A. Cole died on July 16 after suffering gunshot wounds to the face earlier in the day.

Reports indicated shots fired, with two victims who had been shot.

One victim was transported to a local hospital with non-life threatening injuries. Cole of Helen Street in Peoria, was driven by private vehicle to UnityPoint Methodist hospital with a gunshot wound to the face.

He was later transferred to OSF Saint Francis Medical Center, where he remained in critical condition.

In the evening hours of July 16, Cole’s condition declined and he was pronounced dead at 9:01 p.m.

The caliber of the weapon is not being released. This case continues to remain under investigation by the Peoria Police Department.

On Sunday, July 21, at approximately 10:02 a.m., the Peoria Police Department, Peoria Fire Department, and Advanced Medical Transport responded to 2312  W. Howett St. in Peoria on a wellness check initiated by family members of the home’s residents.

On arrival, two residents were found inside. One female was found deceased; another male resident was found confused and incoherent. The male resident was transported to OSF Saint Francis Medical Center for treatment of a suspected heat-related illness. His condition is unknown at this time.

The female resident, 61-year-old Julia M. Morgan, was found lying in bed unresponsive and not breathing. She was pronounced deceased at 10:55 a.m. by the Peoria County Coroner.

The temperature inside of the home registered at 97 degrees Fahrenheit. Officers reported that they discovered a window A/C unit sitting on the floor of the living room; however, the unit was not producing any cool air.

According to the sister of Julia M. Morgan, the couple was unable to lift the A/C unit to properly place it in the window of the home for cooling.

Julia M. Morgan’s cause of death was related to exacerbation of chronic medical conditions due to extreme heat stress. 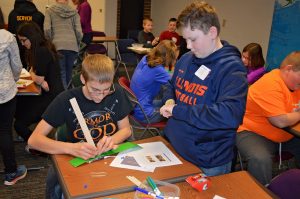 This venture provided classroom teachers with a new 4-H curriculum that was developed in the Fulton-Mason-Peoria-Tazewell Unit and aligns with the Next Generation Science Standards (NGSS).

Furthermore, teachers were given supply kits worth over $150 granted by the Illinois 4-H Foundation to help them implement the program. Teachers, in conjunction with 4-H youth development educator Emily Schoenfelder, used these materials to facilitate a series of six, hands-on STEM activities.

The curriculum also encouraged students to work in groups, try new things,  communicate ideas, explore the engineering design cycle as a problem-solving tool, and have fun.

Upon completion of this program, participating students were asked about their attitudes and interests around STEM, as were students who did not participate in the program.

Results showed that there was a statistically significant difference in the enjoyment of science between the participating and non-participating students, with 99 percent of participants indicating that they liked science.

Furthermore, 88 percent of participants said they learned new things about engineering, with 72 percent indicating that they knew how to define an engineering design problem.

Additionally, several participating teachers expressed their appreciation at having these ready-to-go lessons to offer their students.

For more information, visit the 4-H website at go.illinois.edu/ExtensionFMPT.

Mary Frahm has accepted the head coach position for the women’s volleyball program that will debut at Heartland Community College in this fall.

Frahm comes to Heartland from Illinois Wesleyan University, where she served as assistant volleyball coach since 2014. During her time at IWU, the Titans posted a .752 winning percentage with a 2018 NCAA Sweet 16 appearance. They were CCIW Tournament champions in 2018.

As a collegiate athlete at Lewis University in Romeoville, Frahm was a two-year captain of a top-25 Women’s volleyball team. During her time at Lewis, the team made four consecutive NCAA DII Tournament appearances with a GLVC Conference Tournament Championship in 2010.

“Coach Frahm has shown excellence throughout her entire volleyball career. She possesses the passion and experience to start our volleyball program and bring it to national prominence,” said Athletics Director Ryan Knox.

In addition to the women’s volleyball program, Heartland has added men’s golf and men’s and women’s cross country teams to the current lineup of sports programs.