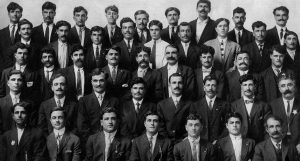 Well known in Peoria, the Itoo Society was founded in July 1914 by this group of 46 immigrants from Aytou, Lebanon, all of whom have descendants still living in Peoria. The society celebrated its 100-year anniversary in 2014 by helping the city of Peoria establish a sister city relationship with Aytou. (Photo courtesy of Itoo Society)

It’s been said that too many cooks spoil the broth, but the opposite seems to be true at the Itoo Society.

Twice a year more than 100 society members gather over the course of a week to prepare native Lebanese dishes for the annual Itoo Supper in November and the Shish-Ka-Bob, which takes place June 26 this year.

A core group of about three dozen people do the prep work during the week leading up to the event, and nearly 150 turn out a few nights before to roll the cabbage-leaf bundles of meat, onions and spices that will then simmer in tomato sauce.

“You can stand at the end of the room and look down those long tables and see people on both sides, and the conversations that are going on are just amazing,” said Couri. “You might have a 16-year-old sitting next to a 70-year-old, and they’re actually visiting and talking.”

While they’re talking, the elders teach the young the precise way to roll the cabbage as they learned themselves many years ago.

“That’s the best thing. No matter how hard the work is, people get to know each other again. And every night we walk out of there exhausted, but everybody’s smiling because we have a great time working with our cousins,” he added.

The Itoo Supper and the Shish-Ka-Bob are fundraisers for the nonprofit Itoo Society, but the events are also a way for society members to share their proud heritage with the Peoria community, which comes out in droves.

The Itoo Society name is well known in Peoria as many people have attended one of the society’s dinners or a wedding or other community event at the Itoo Banquet Hall at 4909 W. Farmington Road. Most probably aren’t aware of the society’s long history, however. 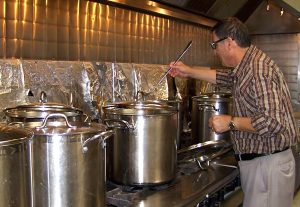 Semaan Trad, manager of the Peoria Itoo Society, stirs pots of food while cooking for a benefit meal for the society last year. Founded in 1914, the Itoo Society is hosting its annual Shish-Ka-Bob dinner from 11 a.m. to 7 p.m. June 26. (Photo courtesy of Itoo Society)

Originally called the Itoo Reform and Progress Society, the organization was founded in July 1914 by a group of 46 immigrants from Aytou, Lebanon, all of whom have descendants still living in Peoria.

The society celebrated its 100-year anniversary in 2014 by helping the city of Peoria establish a sister city relationship with Aytou, a mountain village in northern Lebanon on the Mediterranean Sea about 70 miles northeast of Beirut. There’s always been quite a bit of travel between the people of Aytou and the Peoria residents, Couri said.

Referring to the difference in spellings between the society name and the town of origin, he said, “I always joke around when people ask me that and say there are as many ways to spell Itoo as there are to spell Couri.”

About 6,000 Aytou descendants currently live in Peoria, while the population of Aytou is only about 350, though that number nearly doubles in the summer, Couri said.

His grandfather, Mike Couri, helped write the society’s original bylaws in 1914, which focused on such things as helping people from Aytou better themselves, learning how to get along in the community and helping facilitate any differences that may arise between families.

While the society still raises funds among its members to send medicine and money for the poor in Aytou, the group’s focus has changed over the past decade to concentrate more on working with local charities and a few national ones, including St. Jude Children’s Research Hospital, Couri said.

Another change that has occurred within the Itoo Society—and in society in general—is that younger people are less likely to stay in the area after they mature.

“In my generation, probably 85 percent of us stayed in the Peoria area,” Couri said. “In the generation below me, probably 45 percent have stayed. We’re like every organization in that we’re losing the younger generation in most cases.”

One way the Itoo Society has addressed this is to expand its board by six seats and fill those seats with members who are under 22.

“We’ve also kicked around the idea of possibly doing a secondary associate membership because we always have people from the Peoria community express interest in becoming a member, and there are people from other parts of Lebanon who would like to come in,” Couri said. Currently, the bylaws state that members must be born in Aytou, descended from someone born there or married to a member.

“I do think the club’s founders expected the club to last more than 100 years,” he added. “I always emphasize to my generation and generations below that this was their dream not just to help themselves but as a legacy for all of us. It’s something that’s very important to us and helps us remember our heritage and keeps us close together.”

The society has been remodeling the Itoo Hall, which was built in 1973 and holds about 500 comfortably, but it’s still open for the upcoming Shish-Ka-Bob, Friday night dinners, weddings, community meetings and charitable functions. The society hopes to host an open house in the fall after the remodeling is finished, Couri said.

Tickets for the Shish-Ka-Bob, which runs from 11 a.m. to 7 p.m. June 26, are $13 each and can be purchased in advance at the hall or at the door. The meal will include shish kebab, cabbage rolls, Lebanese salad and pita bread. Carryout will be available.