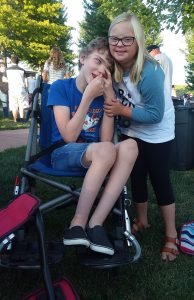 Alex Comacho, 12, and Maggie Getz, 10, have been friends since they first met at Easterseals Central Illinois. Until this year, when Alex began attending Morton Junior High School, they went to school together at Lincoln Elementary. (Photo by Holly Eaton/for Chronicle Media)

Enchiladas for Easterseals may not sound like a typical fundraiser, but when Alex Comacho’s family hosted an enchilada party for the foundation nearly a decade ago, it launched Team Alex, an initiative that has since raised almost $200,000.

“Our family had received such good services at Easterseals for Alex, and he was doing well, so we wanted to give back and we felt very strongly about it,” Susie Comacho, Alex’s grandmother said. “We had an enchilada party, and some other little events with friends and family, but after the last one, we thought, ‘We aren’t going to be able to raise that much money with these little parties.”

Three years after the first small fundraiser, the Comachos hosted the first Rock the Farm event at Mackinaw Valley Vineyard, an annual event that droves of Team Alex fans showed up for this year’s fundraiser on Aug. 8.

“We’re great friends of the family, and we wouldn’t miss this for anything,” Anne Lupo said. She and her daughter, Elise, drove from Morgantown, West Virginia to volunteer with Team Alex. That night, they sold raffle tickets for an acoustic guitar signed by the members of The Way Down Wanderers.

Suzie said her daughter, Katie Canon and daughter-in-law, Cathy Neumann, helped setup Rock the Farm as a concert venue, and The Way Down Wanderers have been the main attraction at the last five fundraisers.

“My daughter Katie called one day, she’s friends with a band in Minneapolis, and she said, ‘Let’s expand and have a couple of bands and a concert,” Susie said. “Then Cathy saw the Way Down Wanderers and said, ‘I just saw the band that we need to get!’

The Comacho family give a great deal of credit to the popular band for helping to bring attention to Team Alex and Easterseals, and said the members have been immensely caring and supportive. 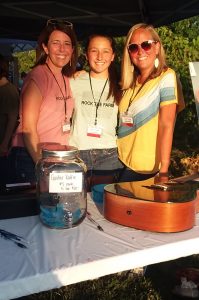 Anne Lupo, left, her daughter Elise of West Virginia and Katie Chatwell volunteered for August 8 at the 6th annual Rock the Farm to benefit Easterseals. All three are friends of Alex Comacho and his family. (Photo by Holly Eaton/for Chronicle Media)

The money raised for Easterseals is dedicated to a cause that the Comacho family felt needed more attention; cortical vision impairment. CVI is the leading cause of visual impairment in infants and toddlers worldwide.

Shortly after he was born, somewhat prematurely, Alex’s health quickly declined. He first suffered a nearly fatal blow from a massive, rampant bowel infection. The infection caused septic shock, which resulted in brain damage, and he was later diagnosed with cerebral palsy and CVI.

CVI is caused by damage to the visual centers of the brain, those that communicate between the brain and the eyes. People with CVI have no physical damage to their eyes, and are able to see, but the brain cannot interpret what is being seen.

Alex is now 12, and will begin the school year at Morton Junior High School. He is a happy, friendly boy who has become quite well-known in the area thanks to the Team Alex events. His struggles, particularly with CVI, however, have brought change and help to local CVI patients.

“We had to take Alex out of state for CVI treatment and it was difficult because it’s so under-diagnosed and under-treated. We were bringing back here what we learned, though, from Pittsburgh and Cleveland,” Susie said. “We really wanted to start a CVI clinic here at Easterseals Central Illinois.”

They did that, and all of the the money that is raised for Team Alex helps fund the program, which Susie said is expected to see continual growth. For more information on Team Alex and Easterseals, visit www.goteamalex.com.