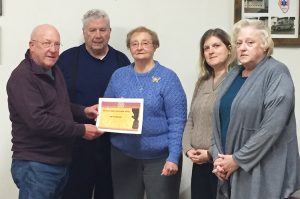 At the Nov. 11 City Council meeting, the Rotary Club of Chillicothe donated the sculpture, which will replace the current deteriorating carving.

The original eagle sculpture, carved by Tim Gill, was carved from the tree on the riverbank and was donated to the city by the Rotary Club of Chillicothe in November 2010.

When the base of the original sculpture began to deteriorate, the city cut the eagle from the base and built a concrete support structure. The Rotary explored ways to repair the current eagle, but it was determined there was too much damage and opted to purchase a new one.

Well over a year ago Rotary began looking for someone to carve a new eagle. In Altoona, Iowa they found sculptor Gary Keenan. He would begin looking for a log large enough to create a majestic eagle.

It could not be a replica of the original which was carved from a standing tree at Eagle Landing. Keenan said the log he used was as large as he could move and handle.

In the spring, the new eagle sculpture will be installed by the city on the current concrete base at Eagle Landing after the sculpture has been sealed.

A dedication ceremony will take place.

Rotary Club of Chillicothe meets at Happy Thought Coffee at 7 a.m. on the second and fourth Tuesday of each month.