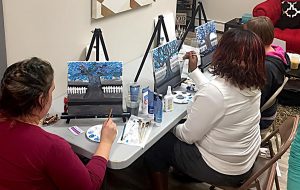 Participants in a Colorful Healing paint night at MindOasis Counseling in Peoria work on their canvases. Therapist Amy Fischer, who owns the practice, teaches breathing exercises and mindfulness during the monthly events, which are open to both clients and the general public. (Photo by Elise Zwicky / for Chronicle Media)

While girls’ night out paint and wine events have become trendy, a local therapist has put a new twist on the concept to make it truly therapeutic.

Licensed clinical social worker Amy Fischer, owner of MindOasis Counseling, offers a Colorful Healing paint night at 6 p.m. on the first Friday of each month at her Peoria office that’s open to her clients and the general public.

“We work on deep breathing and relaxing, and I give a lesson mindfulness,” Fischer said. “We focus on affirmative thoughts and opening up and talking while we’re painting.”

Fischer has been in practice for 11 years and opened her own counseling center about a year ago. She started the Colorful Healing paint nights last spring after attending a local wine and art night with her husband.

“The woman leading that event asked me if I was an artist, and I realized I kind of am,” Fischer said, explaining how the idea came to her. “So I bought all the easels and started small, and it’s grown.”

“Sometimes women think they need to always do something with a friend, but I encourage them to come alone because it helps with social anxiety,” Fischer said. “Usually, no one knows each other when they start, but they become friends.”

Painting is naturally calming because it brings out your inner child, according to Fischer.

“If you try to do a drawing with your less dominant hand, it brings out emotions inside you that you haven’t been in touch with for a long time,” she added.

“Sometimes something so relaxing becomes stressful because people put pressure on themselves thinking it has to look a certain way,” Fischer said. “Those classes where they show you step-by-step how to paint a picture are good in certain ways, but mine is unique in that I don’t want their paintings to all look the same. 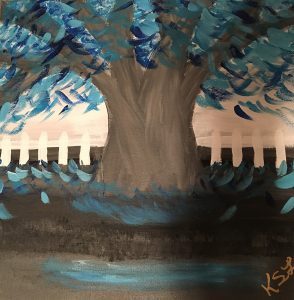 Kelli Landon has participated in six Colorful Healing paint nights at MindOasis Counseling but said this is her favorite painting she’s created. She likened the experience to meditation, noting that it’s both relaxing and enlightening. (Photo by Elise Zwicky / for Chronicle Media)

“By giving them choices in how to paint their own picture, we’re building their self-confidence and bringing those anxieties out in the open. The rules are thrown out the window. So my (event) is hugely different than the others,” she added.

Kelli Landon has done six of the Colorful Healing paint nights, though she admits she was very hesitant to try it at first.

“I was really kind of scared at first,” Landon said. “I am not artistic at all, but it’s very relaxing. It’s almost like an escape because you’re not thinking about anything except the painting. It’s helped me a lot.”

Landon has found it so therapeutic that she bought paints and easels to use at home.

“It kind of  reminds me of meditation,” she said. “I would definitely recommend it to others.”

The theme for the next Colorful Healing paint night on Friday, Jan. 6, is inner motivation. The cost is $40 per person and includes the paint, canvas and food, which is usually pizza and chocolate. Cost for the couples night in February will be $60 per couple, and the theme will likely revolve around communication, Fischer said.

MindOasis also offers therapeutic yoga on the third Friday of each month for $20 per person.

“The yoga is taught by a certified yoga instructor, and then at the end I do guided imagery. We work on relaxing the whole body almost to a meditative state, and then there’s a release of emotions,” Fischer said. 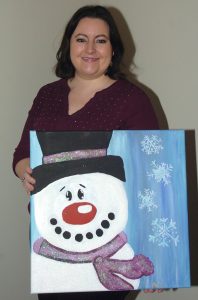 Licensed clinical social worker Amy Fischer holds a painting she created at one of the Colorful Healing paint nights she hosts at her MindOasis Counseling service in Peoria. The therapeutic events are offered the first Friday of each month. (Photo by Elise Zwicky / for Chronicle Media)

She also offers a women’s group with a different theme each week at 6 p.m. on Mondays. The theme for the Jan. 9 group will be relationship stressors. Cost to attend the 90-minute group meetings is $40, with a $10 discount for the first time. All the classes and groups are open to the public but require pre-registration.

“The point of the groups is to get these women therapeutic help because every woman can use someone whose non-biased to talk to who can help understand their needs,” Fischer said. “Counseling is very stigmatizing and can be scary for so many people, so these classes and groups are a way for people to see what it’s like and how it can help.”

Fischer will be a speaker at the I’ve Decided motivational conference Jan. 21 at the Peoria Civic Center on the topic of “Embracing Your Super Power,” which she said is learning how to control your thoughts.