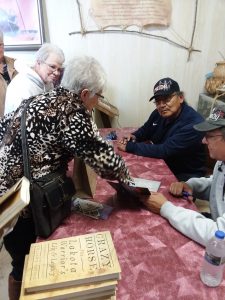 Floyd Clown, grandson of Lakota warrior Crazy Horse, and author William Matson, front, were at the Seven Circles Heritage Center in Edwards Oct. 13 to meet visitors and share the story of Crazy Horse and truth of his bloodline. Matson worked for 12 years with the Clown family, researching legal documents and oral histories to establish the Crazy Horse blood tree, which is now recognized in federal court. (Photo by Holly Eaton/ for Chronicle Media)

His name was Tashunke Witko, known to some as War Eagle, and to many as Crazy Horse, the Lakota Warrior.

Now, after 141 years after his death, the family has broken its silence and established its bloodline in federal court.

The family went into hiding in 1877 after Crazy Horse was killed at Fort Robinson, Neb. Another of his brothers was killed in 1918, and the family members fell silent for fear of persecution.

“Assumptions are when you make something up, then, and after so long, you begin to believe it’s true when it’s not the truth,” Clown said. “When they were assuming, they were forgetting who their real grandfathers and grandmothers are, and, in doing so, they are forgotten.”

It boils down to land administration, he said. The federal government grants administrative powers over Native American lands to bloodlines. Members of the Oglala Sioux became legal administrators of the Crazy Horse estate based on false claims.

“When our bloodline was introduced to federal court, they made me the administrator of Cheyenne River,” Clown said. “But these other two administrators, Pine Ridge and Rosebud. We are waiting for them, for their blood tree.” 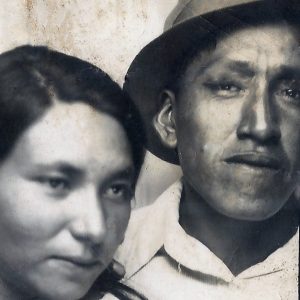 Edward Clown, nephew of Crazy Horse, and his wife Amy; members of the famous Lakota warrior’s family who maintained lifelong silence about their bloodline for fear of retribution. Edward died in 1987; Amy in 1996. Floyd Clown, legal administrator of the Cheyenne River Indian Reservation, is Edward’s grandson. (Photo courtesy of The Edward Clown Family)

“We’re still waiting on them. They’ve postponed, extended it. That’s why we decided to make this book and we’re going around the world, telling the truth of our family,” he said. “There are over 500 books written about my grandfather, and movies and they are all fiction, based on assumptions.”

“Crazy Horse: The Lakota Warrior’s Life & Legacy,” details the oral and written history of the Edward Clown Family, and clarifies the lineage of Crazy Horse through probate testimonies and documents substantiating the bloodline.

“The probates, this is how we show our identity and this is what we’re waiting for from these two administrators,” Clown said. “Our Lakota family handed down these stories with truth. The book was originally for our family, our children and grandchildren, but we want the world to know.”

“When he was in basic training, someone asked him who won the battle of Little Big Horn, and he said, ‘The Indians did,’” Matson explained. “That was the wrong answer and he got punished for it, so he held a grudge and passed that along to his son.”

Matson made a deathbed promise to his father, also a writer, that he would write a book to clear up the facts. In 1999, he traveled from Oregon to the Chief Dull Knife College Library in Lame Deer, Montana to research Crazy Horse.

“Things were all mixed up,” Matson said. “I wasn’t being lead in the right direction, and the books and materials, it didn’t add up.”

In 2001, while researching at Bear Butte, South Dakota, Matson was given the phone number for Doug War Eagle, a grandson of Crazy Horse. Unknown to Matson, the Crazy Horse family were told by their grandfathers that “someone from the west was coming to help them.” 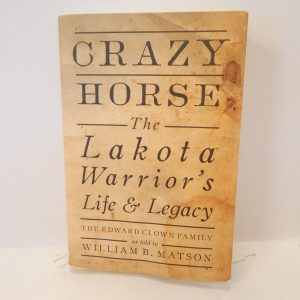 Published in September 2016, “Crazy Horse: The Lakota Warrior’s Life & Legacy” is the account of the Edward Clown family’s tales and memories told to them about Edward’s ancestor Crazy Horse. The family is working to clarify the inaccuracies surrounding the life of the famous Lakota leader, and share knowledge that was kept private from 1877 until 2001. (Photo courtesy of The Edward Clown Family)

Before they would share their stories, Matson was first asked to attend a ceremony, to determine that he had a “good heart.” Matson was escorted to an Inipi, a three-hour sweat lodge purification ceremony.

“They determined after the ceremony that I have a good heart,” he said. “It was very intense.”

For 12 years, Matson worked closely with Clown, Doug War Eagle and Don Red Thunder, also a grandson and the book was published in 2016. Matson, his wife Mae and Clown have since traveled extensively sharing a truth that was 141 years in the making.

“When we showed our blood tree, this was the first time anybody had ever seen it, the paternal side and the maternal side,” Clown said. “Now, I can say I’m a grandson. I can show proof of who I am under federal law; my identity.”

Clown and Matson will return to the area on May 12, 2019 when they visit the Bloomington Public Library. There likely will be a stop in East Peoria, they said. A library of books and documentaries can be found at the website, www.reelcontact.com.