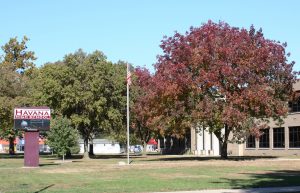 Editor’s Note: Andrew Adams is a student in the Public Affairs Reporting program at University of Illinois Springfield who is a reporting intern at the Capitol for the State Journal-Register in Springfield.

SPRINGFIELD – Matt Plater has been in charge of school districts for more than two decades. Something is happening he’s never seen before. Jobs that used to draw hundreds of applications now get a dozen. More specialized positions might not get any at all.

“It’s horrible,” he said. “This is my 23rd year as a superintendent in Illinois and this is the worst it’s ever been.”

Plater oversees Havana Community Unit School District 126, a small district in Mason County with about 1,000 students spread across three schools. In 2020, the district couldn’t find a Spanish teacher, so they contracted with an outside company to offer remote instruction.

Students worked in a classroom with an in-person monitor while they worked online. They’ve cycled through four Spanish teachers in five years.

“We went a year and a half without a PE teacher,” Plater said.

Havana isn’t alone. Western Illinois is the epicenter of an educator shortage that affects the entire state.

Ninety-five percent of superintendents in the region said they were facing a “minor to serious” problem with finding teachers, according to a 2021 survey commissioned by the Illinois Association of Regional Superintendents of Schools and Illinois State University.

The problem is getting worse, according to the survey, which also revealed that 86 percent of districts statewide are receiving fewer qualified applicants than in past years.

This lack of qualified applicants has forced some districts to have teachers instruct classes in subjects they aren’t qualified to teach.

“Virtually every district in downstate Illinois has a teacher teaching something they’re not 100 percent qualified in,” Plater said.

As of Jan. 14, the Illinois Department of Public Health listed 78 active COVID-19 outbreaks at K-12 schools. One in five of them are at schools in West Central Illinois. Sangamon County alone has had four outbreaks linked to schools.

This has exacerbated the problem by highlighting the lack of substitute teachers available to schools in the region. Where districts were able to get by for a time by relying on retired teachers to come in and sub for a day or two, they’re unable to do so with the risk of COVID.

“You take someone who retired five years ago, who may be living with an immunocompromised person,” Reis said. “They just won’t do it.”

This has led to districts looking everywhere to find people to watch classrooms, including superintendents, who are now covering cafeteria duty, driving buses and teaching classes.

In Jerseyville, on the border between west central Illinois and the Metro-East, Jerseyville Community School District 10 Superintendent Brad Tuttle is beginning to see the effects of the teacher shortage.

“This year is the first year, certainly since I’ve been here, where we’ve had difficulties,” he said, adding that because his district is more funded than some neighboring districts, higher pay and more up-to-date facilities have made the district attractive to candidates.

Tuttle is particularly worried for the future of vocational education in his district, a sentiment echoed by Reis. Though he has staff to teach career and technical education now, they will eventually leave or retire.

“I’m scared of who I’m gonna hire to replace those teachers,” he said.

The teacher shortage problem has multiple causes. The survey of superintendents found that these include strict licensing standards in Illinois and a perceived degradation of the respect that educators once had. There are also practical issues, like pay and pension.

“I think they’re gonna have to fix the pension system,” Plater said.

In 2011, the state introduced a new pension system which increased the minimum age of retirement from 55 to 62 and decreased some of the benefits available to retirees in the system.

Over the years, that system has been criticized for being poorly managed. In 2020, the organization that administers teacher retirements in Illinois reported $80.7 billion in unfunded liabilities, meaning it had 40 cents for every dollar it will owe to teachers when they retire.

Reis said she is hopeful for “grow-your-own” programs which aim to encourage local students in high schools and colleges to go into education. The idea is that they are more likely to stay rooted in their home communities, where finding teachers can be difficult. The median distance between schools that teachers attended and the schools they now work in is 13 miles, according to the IARSS.

Many are geared toward increasing the number of teachers of color in the field, though similar approaches can be used in many types of communities.