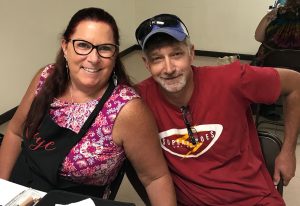 WTP Rocks creator Lloye Pond poses with her husband, Chris, while painting rocks. Lloye created the group to spread kindness and joy by painting and hiding rocks in the Tri-County area for others to find. (Photo courtesy of Kim Koch)

Kindness rocks in the Tri-County area thanks to a large group of residents who have made it their mission to spread joy through one painted rock at a time.

A Facebook group called WTP Rocks that was started two years ago by Metamora resident Lloye Pond now has nearly 11,000 members. The members paint pictures, symbols or encouraging words on small rocks and hide them around Woodford, Tazewell and Peoria counties for others to find.

“We were at 4,000 members within two weeks,” Pond said. “I was totally surprised. But it is so amazingly fun and from some of the stories we have gotten behind the scenes, we know it has helped people emotionally and physically.”

The Kindness Rock Project was originally started on the East Coast by life coach Megan Murphy in 2015 and has since spread around the United States, as well as to other countries, including Canada, Australia, Thailand and England. Pond first learned about it in 2017 while visiting friends who participate in the movement in Volusia County, Fla.

“I thought it was just an amazing idea,” said Pond, who works as an office manager and safety director for a mechanical contracting company. “So I came home and painted up a bunch of rocks and came up with the WTP name for Woodford, Tazewell and Peoria counties.”

Not only is the project uplifting for people who unexpectedly find a rock, it’s also therapeutic for the members who paint and hide the rocks, Pond added.

“One lady was almost bed-ridden. She had just kind of given up and didn’t want to leave her house. Her daughter told her about us and brought some rocks and paint to her, and now she is one of our biggest and best painters. It’s just amazing what it’s done to help some people.” 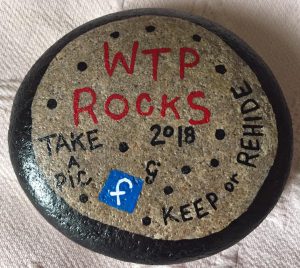 WTP Rocks founder Lloye Pond paints a deer on a rock. Since creating the Facebook group in 2017, Pond says she paints an average of 25 to 30 rocks each week. She and other group members paint and hide rocks in Woodford, Tazewell and Peoria counties to bring a smile to the people who find them. (Photo courtesy of Lloye Pond)

Kim Koch, an administrator for the local Facebook group who joined the movement a few months after Pond started it, said she thinks the members enjoy feeling like they are a part of something.

“Especially in this day and age, when the country is so divided,” she said. “There are such negative things going on around us. This is one area where we feel like we’re safe, we can create and we can talk to one another. It’s a happy thing to talk about.”

Pond added, “We do not allow any drama on our site. I think that helps, too. We don’t allow advertising. It’s just all about kindness.”

Most of the rock painters include information about the Facebook page on the back to encourage the finders to share a photo of the rock and where it was found. Some people keep the rocks they find, while others hide them again for someone else to find.

“Some people don’t have access to a computer or a phone to share a photo of a rock they’ve found, and that’s fine. The mission of the group is for kindness and bringing smiles to people’s faces, even though we may not see it,” said Koch, who works as a human resources vice president.

Pond said members have heard many stories from people who say, “I found this rock, and  it’s the perfect rock for me at the perfect time.”

Both Pond and Koch stress that anyone can paint a rock, regardless of age or artistic ability. 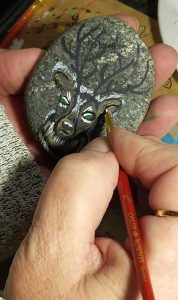 WTP Rocks founder Lloye Pond paints a deer on a rock. Since creating the Facebook group in 2017, Pond says she paints an average of 25 to 30 rocks each week. She and other group members paint and hide rocks in Woodford, Tazewell and Peoria counties to bring a smile to the people who find them. (Photo courtesy of Lloye Pond)

She started out by watching YouTube videos and now she sometimes posts her own tutorials to show others how easy it is. “You don’t have to be an artist, because we didn’t start out that way. But if you keep at it, you’ll generally always improve,” Koch said.

Pond added, “I’ve never been an artist, but the more I paint, the better I get at it and the more I love it. My sister says it’s an imperfect media that I don’t have to make perfect. Even if you can’t paint something, you can write something. Write your favorite quote. Write the word ‘smile.’ Draw a smiley face. Anyone can do it.”

While the members mostly paint rocks on their own, the group does sometimes plan what they call meet, greet and paint events at local libraries or park district facilities. The group also helps with some fundraisers, including a recent one in Chillicothe for the nonprofit organization Drew’s Plots. Members painted and hid several hundred rocks around Three Sisters Park for that event earlier in April. WTP Rocks will also have a booth at Metamora’s annual Old Settlers Days in June.

“Even though there’s more than 10,000 of us, we’ve all become friends through the group,” Koch said. “There’s camaraderie. It’s like meeting new people, even though you haven’t really met face-to-face. I have made a lot of friends and it’s given me a purpose to spread kindness.”

Rocks can be purchased at local landscaping businesses. Home Depot also sells bags of smaller rocks, Koch said.  She recommends using acrylic paints, which can be purchased at Walmart or at local craft stores. She also recommends sealing the finished rock with a UV-resistant clear sealer. Rocks should be washed and dried before being painted.

Hiding the rocks can be almost as much fun as painting them, Koch and Pond agreed.

“My husband and I like to hide them together,” Koch said. “We’ll make a loop through the Tri-County area. We hide them in public places that anyone can access.”

Pond said she hides rocks wherever she goes. “If i’m at the gas station, I hide one at the gas pump. If I go to a restaurant, I look for a windowsill on the outside. We hide them when we go on vacation, too,” she said.

For more information, visit the WTP Rocks page on Facebook.