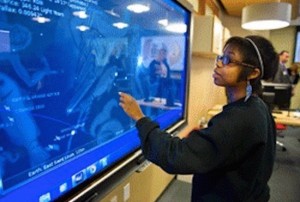 “Mindset: The New Psychology of Success” sounds like the title of a popular tome on the shelves of college bookstores – which, in fact, it is.  However, it also describes a key concept in Southern Illinois University Edwardsville’s (SIUE) East St. Louis Center (ESLC) initiative to transform one of the nation’s most distressed areas.

Located on SIUE’s East St. Louis Higher Education Center campus at 601 J. R. Thompson Drive, the ESCL is home to a spectrum of educational programs, which together comprise a comprehensive, coordinated “talent pipeline,” extending from “preschool to workplace,” according to Johanna Strong Wharton, the center’s director of special projects.

As might be expected, the center encourages development of the science and mathematics skills increasingly demanded by employers. However, the center also emphasizes development of “noncognitive skills” such as “grit and determination,” Wharton adds in an overview of the ESLC program in the current issue of the Federal Reserve Bank of St. Louis publication, “Bridges.”

“ESLC’s theory of change is that low-income youth from low-performing school districts will increase high school graduation rates and college enrollment, while unemployment rates decrease, when students are introduced to programs and services that promote development of noncognitive skills, promote personalized learning, develop teachers’ knowledge and understanding of the significance of noncognitive skills, provide opportunities for increased parent engagement and advocacy, and develop skills in science, technology, engineering, arts and mathematics (STEAM). We are teaching educational endurance instead of focusing only on boosting math and language skills or building college and career pathways,” Wharton explains.

The approach is based on “growth mindset” research by influential Stanford University psychologist Carol Dweck, who has found that academic success is influenced by endurance, perseverance and beliefs — not just intelligence and talent.

“Noncognitive skills”— increasingly considered to be at least as important as cognitive skills or IQ in determining academic and employment success — refers to a set of attitudes, behaviors and strategies that are thought to underpin success in school and work, including motivation, grit, resilience and self-control. They are usually contrasted with the ‘hard skills’ of cognitive ability in areas such as math and language arts, which are measured by academic tests,” Wharton continues. 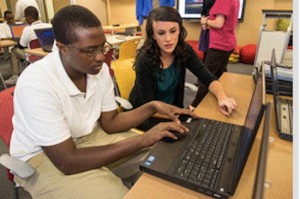 The talent pipeline and growth mindset concepts are not unique to the ESCL.  Both are widely-discussed, cutting-edge topics among educators.  Both are still considered experimental in many circles.

However, the Federal Reserve Bank article suggests the ESCL holds potential to not only help revitalize East St. Louis but objectively test the pipeline and growth mindset approaches.

“Greater East St. Louis is ripe for a transformative model that bridges the gap between low-income community residents and educational and career opportunities. The scale of the target population is small and manageable enough to have transformative impact at the city level, not just within the school,” Wharton writes.

The target population for the talent pipeline totals almost 8,000 individuals, including students attending East St. Louis, Cahokia and Brooklyn school districts and the East St. Louis Charter High School located on the campus of the ESLC.  The ESTL already offers comprehensive programs, services and training to more than 6,000 people annually.

Area youth generally become involved in the ESLC through pre-kindergarten programs such as Head Start or Early Head Start, conducted in partnership with local schools. Kindergarten-12th grade students and their parents can then take advantage of the charter school, PALS/Latchkey programs, or Project Success and Upward Bound classes in math, science, and other subjects.

To ensure underachievement is not the result of health problems, students and clients who access the programs and services on the campus, as well as area residents, can receive care through its SIUE Community Nursing Services Clinic, SIUE Dental Clinic (serving more than 1,500 children annually), and optometry clinic.

Today, East St. Louis-area students generally “are not prepared to join the workforce and don’t have access to professional career opportunities in high-demand fields where job opportunities are prevalent,” Wharton writes. However, that could change, if the ESLC is successful.