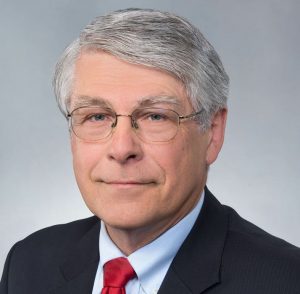 Bradley University President Gary Roberts announced his intent to retire when his contract expires at the end of May of 2020.

Roberts announced this at the recent board of trustees meeting held on campus.

He told trustees and the university’s senior leadership, “As most of you know, I was planning to retire before I accepted this wonderful position to lead my alma mater. All along it was assumed that I would have a limited tenure. Next year, I will be 72 years old, and Donna and I want to have some healthy years to enjoy life and check several items off our bucket list.

“Also, I believe that many of the changes that need to occur at Bradley will take several years to implement fully, and having a president who can provide continuity of leadership throughout that transitional period will be a big plus for the University.”

Roberts was named the 11th president of the university in October 2015 and assumed his duties on Jan. 1, 2016.  The 1970 graduate of Bradley says his retirement is bittersweet.

“I love Bradley and all of the people I have worked with here.  Despite the challenges that Bradley faces as higher education is disrupted and transitions its business model, I am optimistic about Bradley’s future, and I still hope to be a part of it,” Roberts said.

Board Chairman Calvin Butler commended Roberts for instituting a more transparent and positive culture on campus.

“He was a source of stability when the campus desperately needed it. Gary has a sincere openness about him and a willingness to work with all faculty and staff, whether they agreed with him or not. It was evident from day one that his focus was on Bradley and carving a path for a sustainable future,” Butler said.

Doug Stewart, board chairman when Roberts was hired, says his intimate knowledge of Bradley was a huge plus. “We hired Gary because he understood the Bradley experience. As a Bradley graduate, he lived it,” Stewart said.

“He was and still is, as passionate about this university as anyone I know. Gary has a way of encouraging people to think outside the box, to be partners, to be creative, and to be innovative.  He has the ability to look a few steps ahead towards the future, and that’s what made him the right choice for us,” he said.

During Roberts tenure, the university designed and implemented a new strategic plan, launched a faculty salary initiative, began construction and will complete Phase 1 of the new Business and Engineering Convergence Center, and expanded Bradley’s suite of online course offerings, among many other accomplishments.

Roberts and his wife Donna have both become involved in the Peoria area.  He is a member of the CEO Council, the Board of Directors of the Children’s Home of Central Illinois, and chairman of the By-Laws Committee and a member of the Finance Committee for Alignment Peoria.  Along with Donna, he co-chaired the United Way Pillars Society in 2017.

The Board of Trustees will form a presidential search committee to be co-chaired by the board’s vice chairman James Shadid, and secretary Kathi Holst.  Additional trustees, faculty and student representatives will also join the committee.

The university will retain a search consultant and begin laying out the process and identifying candidates this summer.