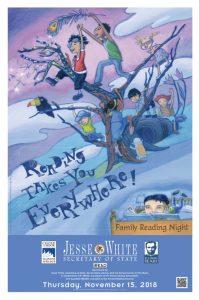 Illinois’ annual Family Reading Night will be held Nov. 15, and the Morton Public Library is participating. Families are invited to come to the library, 315 W. Pershing, at 6:30 p.m. for various activities that center around reading.

Author Tim Pletkovich will speak about his acclaimed book, “Nuns, Nazis, and Notre Dame: Stories of the Great Depression, World War II, and the Fighting Irish,” at the Nov. 13 meeting
of the Tazewell County Genealogical & Historical Society. The meeting will start at 7 p.m. at the Ehrlicher Research Center, 719 N. Eleventh St., Pekin.

In his book, Pletkovich examines the early life of U.S. Army veteran Gerald A. O’Reilly. The son of a prominent Wall Street banker and grandson of a U.S. ambassador under President Theodore Roosevelt, O’Reilly was raised in Brooklyn, New York, during the 1920s and ’30s. His story takes the reader from the bleachers at Ebbets Field in trolley-car Brooklyn to the hallways of Notre Dame during legendary football coach Frank Leahy’s national championship years, to the innermost thoughts of elite Tenth Mountain Division soldier thrust into the horrors of battle in Italy’s harsh Apennine Mountains.

A brother-in-law of former United States Senator James L. Buckley and the late William F. Buckley, Jr., O’Reilly provides glimpses into the lives of one of the twentieth century’s most revered political families.

A resident of Peoria, Pletkovich is married to a Pekin native, the former Melissa Williams. Books will be available for sale and will be autographed by the author.  The society’s business meeting and officer elections follow.

The Morton Public Library is participating in Illinois’ annual Family Reading Night Nov. 15. The annual statewide event is held the third Thursday in November to encourage families to spend quality time reading together. Families are invited to come to the library, 315 W. Pershing, at 6:30 p.m. for various activities that center around reading.

Movies about military to be shown as veterans’ tribute

The Veteran’s Day Film Series will consist of four films. The first one, “When War Comes Home: American Veterans Adjust to Life Back Home,” will be shown at 10 a.m.

The movie follows three soldiers suffering from post-traumatic stress (PTS) and traumatic brain injury (TBI) who share their stories of coping with these devastating invisible wounds of war. Now back home from Iraq and Afghanistan, they face the toughest battle of their lives – trying to find a way to readjust to life with their families and build a healthy and hopeful future out of a present that is wracked by pain, stress and loss. These ever present debilitating illnesses affect an estimated 20 percent of the 2.6 million military service members who have served in Iraq and Afghanistan.

“Healing a Soldier’s Heart” will be shown at 1 p.m.

The movie follows the courageous journeys of four Vietnam veterans, all suffering from severe PTSD, who return to Vietnam to face the demons that continue to haunt them and hopefully heal their PTSD. Under the guidance of pioneering psychotherapist Dr. Edward Tick, the vets visit their actual trauma sites – the places where they fought and killed their former enemies, or saw their friends and comrades die. “Healing A Soldier’s Heart” traces the veterans’ gradual shift from terrorized nightmares, drug abuse and attempted suicides, to healed warriors, with profound lessons for PTSD-suffering younger veterans from the more recent wars in Iraq and Afghanistan.

“Is America in Retreat” will be shown at 3 p.m.

This documentary looks at the hard questions American foreign policy leaders face in dealing with today’s rapidly changing world order. Just how deeply entangled should America be in the world’s affairs? What alternatives are there to being the world’s policemen? Is there really a downside to retreat? And in the absence of the U.S., how might global order be maintained — or destroyed? Based on the book, “America in Retreat” by Pulitzer-Prize winning columnist Bret Stephens, the documentary is hosted by Cato Senior Fellow, Johan Norberg, who travels the world to examine the questions facing a nation that is leaning back toward isolationism.

The Veteran’s Day Film Series ends with “Message From Hiroshima,” which will be shown at 4:30 p.m.

“Message from Hiroshima” illustrates the immense suffering and loss that resulted when the world’s first atomic bomb detonated in Hiroshima. Today, where the Hon and Motoyasu rivers meet, stands the Peace Memorial Park – the former location of the Nakajima district, which was once home to thousands of people and hundreds of businesses before the bombing. Survivors and former residents recount their lives before the bombing, accompanied by computer-generated recreations of buildings and people that could have existed. Old footage, paintings, and lost photos of families intertwine with intimate narration by award-winning actor George Takei, to revive the memory of the sights, sounds, and smells of a lost culture and people.