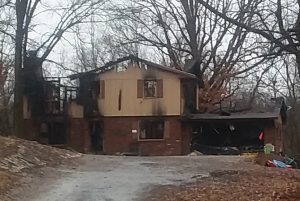 A fire in the early morning hours of Dec. 30 destroyed this home at 8884 Valley Road in Hopedale and took the life of the homeowner. Lisa M. Lenz, 56, died from smoke inhalation. (Photo by Holly Eaton/for Chronicle Media)

A rural Tazewell County woman lost her life in a fire that consumed her home in the early morning hours of Dec. 30.

Lisa M. Lenz, 56, of Hopedale was the only fatality in the fire and no other injuries were reported. The Hopedale Fire Department arrived at 8884 Valley Road at 1:47 a.m., to find the two-story home engulfed in flames.

According to Tazewell County Coroner Charles Hanley, it took firefighters several hours to extinguish the fire. Afterward, Lenz’s remains were discovered, and she was pronounced dead by Hanley at 11 a.m.

Autopsy results confirm her cause of death as carbon monoxide intoxication due to the inhalation of smoke.

It is not known if anyone else was in the home at the time of the fire, or who summoned the fire department.

Lenz’s home, nestled on a wooded lot south of the Little Mackinaw River, is a complete loss. The entire interior was destroyed by smoke and flame, and only very small portion of the roof remains.

According to her Facebook page, Lenz enjoyed the outdoors, and spent time with her family kayaking, canoeing, fishing and camping.

Though a cause of fire has yet to be determined, Hopedale Fire Department Chief Dee Schillp offered a few reminders on fire safety.

Many smoke detectors are now considered “Intelligent” and can send smart phone messages and interact with assistant devices such as Amazon’s Alexa and Google Assistant.

“Some of the newer detectors,” Schillp said, “you throw them away after a few years and don’t have a replaceable battery.”