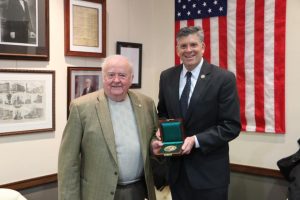 “I cannot let this happen,” James Vernon recalled thinking, as Dustin Brown barged into a room full of children at Morton Public Library, knife in hand, and yelled, “I’m going to kill some people!”

Vernon was at the library teaching chess to 17 home school children on Oct. 13, 2015 when Dustin Brown, 19, entered the library on a murder-suicide mission. Brown was free on bond then, facing charges of possessing child pornography.

An Army veteran, Vernon leaned on military training to thwart Brown’s plan. Brown slashed the veteran’s left hand, cutting two arteries and a tendon during the altercation, but Vernon was able to negotiate with his assailant as the children and a handful of parents escaped unharmed.

“You’ve just got to take it upon yourself to take some risk. All those young lives are worth the bit that I might have left,” Vernon, 78, said Jan. 15 after receiving the Carnegie Medal for Heroism.

The Carnegie Hero Fund Foundation awards individuals, often posthumously, who “risk their lives, to an extraordinary degree saving or attempting to save the lives of others.”

Sandy Rassi and three of her children witnessed the attack. She was present at Vernon’s Carnegie award ceremony.

“A young man in our chess club summed it up pretty well,” Rassi said of one of the children’s impression of Vernon. “When he was in the van riding home with his mom he didn’t know what to say about the entire incident, but he turned to his mom and said, ‘He was a real leader today.’”

On Dec. 21, 2016, Brown was sentenced to 32 years in prison for attempted murder, armed violence and possession of child pornography. Despite claims of childhood sexual abuse, autism and delayed intellect, Brown testified that he was knew his actions were criminal, thus eliminating mental illness as a cause.

Vernon’s injuries required surgery, and he suffered permanent loss of some movement in one of his fingers. In Vernon’s honor, the library installed a second outdoor chess board in addition to one in memory of Ed Bagley. Chess and checkers pieces may be borrowed from the library.

— Veteran honored for saving kids from attacker at library —