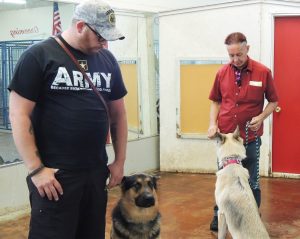 Jeremy (front) works with Sargent while Dave Schnidt works with Liepchen during a Circle of Change training session at Dave’s Doggie Den. (Photo by Lynne Conner / for Chronicle Media)

Hallmarks of the Fourth of July are parades with loud marching bands and shrieking fire engine sirens, neighborhood firecrackers punctuating the night and community-wide fireworks shows that commemorate our nation’s independence and remind us of the men and women who fought to provide the freedoms we enjoy.

But the “bombs bursting in air”— a staple of Independence Day — are not met with awe and excitement for veterans suffering from Post-Traumatic Stress Disorder (PTSD).

For these vets, experiencing a fireworks show can trigger memories of real bombs and explosions witnessed during active duty.

Circle of Change Veterans Dog Program, pairs veterans suffering from PTSD and other mental health issues with dogs who have also experienced trauma.  In Rockford, the program meets weekly at Dave’s Doggie Den where a certified dog trainer leads a small class of veterans and troubled dogs through training exercises meant to build trust, confidence and friendship between the animals and veterans. 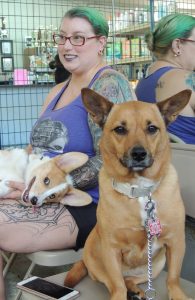 Laura, a veteran participant in Circle of Change with Jean Luc Picard (on lap) and Annabelle Lee. Both dogs are Corgis. (Photos by Lynne Conner / for Chronicle Media)

Stephen Haight, executive director of Circle of Change, said the program has been around for 10 years and meets in Rockford, Loves Park and Madison, Wis.  Veterans with PTSD, traumatic brain injuries or other psychological issues are typically referred to the program through the Veterans Administration (VA) Clinic in Rockford, VA Centers or the VA in Madison.

“Circle of Change is not about service dogs or matching veterans up with dogs,”  Haight said. “Veterans can come to our program to receive psycho-social therapy in the form of being taught how to train dogs”

Vets attending Circle of Change typically work with dogs provided by the clients of a dog trainer.  In this way, Haight explains, the focus of the class is helping veterans work through their issues while helping a troubled dog learn obedience.

Not all veterans bring their own dogs to Circle of Change for training.

Steve, a veteran participant of Circle of Change, praises Hank during class.
(Photos by Lynne Conner / for Chronicle Media)

“For many of our veterans coming into the program, dog ownership is a big responsibility and they may not be ready for that yet,” Haight said.  “But as a result of the program, a lot of veterans do go on and get their own dogs.  There are programs that allow vets to adopt dogs free of charge.”

Some of the dogs that attend Circle of Change are rescue dogs who have problems with obedience and trust.

“A lot of the dogs in our program have issues of being withdrawn, poorly socialized, paranoia and poorly trained. These dogs have many of the same symptoms that our veterans have; so they are able to work through these issues together,” Haight said.

“It really helps to build self-esteem for the veterans.  You can see that by the end of the first class session, the veterans are already starting to get results in training the dogs.”

During a Circle of Change training session, it’s not unusual for a veteran to work with more than one dog.

Haight explains, “Some of the dogs are just poorly trained, where the owners haven’t initially trained or socialized them at all.  By coming here, they get to work with different people, too.  A vet doesn’t necessarily work with the same dog all time.  In a two hour class, dogs are often swapped between vets.  This is done deliberately for the vet and the dog, so each of them gets a well-rounded experience.” 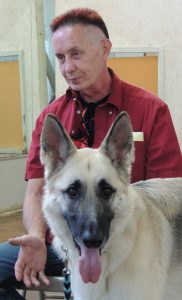 Haight notes that the dogs are all different breeds and different ages.

The small classes, supportive environment and camaraderie at a Circle of Change session serves as a boost for both dogs and veterans.

“Dogs don’t judge,” Haight said.  “We’ve known for a long time that being with dogs and petting dogs lowers your heart rate, eases respiration and calms people down.  If you add these physical benefits to going through the weekly training; it’s a chance for the veterans to just focus on the dogs and not their issues.  The vets get into the program and realize that there are other people that are going through many of the same things they are experiencing.  There’s a lot of peer support.”

Haight said that most of the vets who participate in Circle of Change have served in Vietnam.

“We do certainly see a lot of Vietnam-era veterans, but what I would like to do is reach out to the younger veterans that are returning from Afghanistan.  Many of these vets have done two or three-year tours, so they really need a program like this.”

Circle of Change is a not-for-profit group funded through grants, fundraising and tax deductible contributions.

Haight has been involved for several years and took over as executive director three months ago.  “I’m the first paid position; it’s been all volunteer prior to me.  I was hired as a result of a grant from the Hendricks Family Foundation out of Beloit.”

The classes are offered free of charge to the veterans and the dog owners.

“Even though we contract with the trainers and pay them; each one of our trainers goes way, way above and beyond what we contract them to do,” he said.

Dave Schnidt, owner of Dave’s Doggie Den, sees the Circle of Change program as a way to give back to the veteran community.

“I’m not a veteran, but my Dad was a vet and I think he had PTSD, but no one knew what PTSD was back then or how to treat it,” he said.  “So to me, having the Circle of Change Veterans Dog Program meet at my training facility, is a way to help out these guys coming back from fighting for our country.”

Involvement in Circle of Change, Schnidt says, is also somewhat of a departure from typical veterans’ organizations.

“Many veterans congregate at places like a VFW Hall or Navy Club to socialize.  These places serve alcohol, which is not be the best environment for a vet with PTSD.  A group like Circle of Change brings veterans together in a positive environment, a safe zone for both vets and dogs.  This program really makes my job as a dog trainer much easier,” he said.

Steve, a Vietnam veteran, has participated in Circle of Change for about six years and finds the program very beneficial and extremely rewarding.

“The theory behind an organization like this is that dogs have a lot of the same issues that people do,” he said. “I’ve found this to be very, very true.  Many of us with PTSD have trouble trusting authority figures…when we work with the dogs in class, we can see their issues in obeying commands.  So, getting the dogs to work through these issues was helpful for me in getting over some of my fear of people.”

Steve also draws a correlation between the dogs going over training exercises at home with their owners, to the veterans following the advice of their therapists.

“If we don’t practice (what we learn in therapy); we’re going to be just like the dogs, they’ll come back and not be any better than they were the week before.  So, there is a direct relationship there between practicing techniques you’ve learned to become a better person.”

As a part of Circle of Change, Steve has had many memorable experiences training dogs.  He relays an especially poignant story about fear and confidence.

“Dave brought a female Bull Mastiff puppy to one of our classes.  This dog was so scared of people that it would wet on the floor if anyone came over to pet it,” he said. “She was just terrified of being around people.  The day that I worked with this dog, I had come to class with my own fears; I had just been diagnosed with cancer.  As the weeks went by, the dog became less fearful of people and I became more determined to fight my cancer.  This is what Circle of Change is all about; veterans helping dogs and dogs helping veterans.”