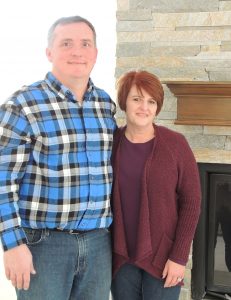 Jason & Trish Grabbert by the fireplace of their newly rebuilt home. (Photo by Lynn Conner / for Chronicle Media)

During the course of one day last year, Jason and Trish Grabbert would experience a roller coaster of emotions including horror, heartbreak and ultimately hope.

Friday, Sept. 15, 2017 had started like any other weekday for the Machesney Park couple.  Each had left their home on Fenceline Drive that morning headed to work.

“About mid-morning, I got a call on my cell phone from our across the street neighbor, Jan.  She told me that our next door neighbor’s house was on fire and that she was worried about our house,” Trish said.  “I left work and wasn’t too concerned because no one was at our house so I thought maybe there would be some minor damage.”

“As I drove down Perryville Road to Route 173, I saw heavy black smoke in the distance and I began to really panic,” Trish said.  “There were cars and people everywhere.  I had to park quite a distance away from my neighborhood and I just started running.”

As she got closer to her street, Trish was met by her son, Tyler and daughter-in-law Alyssa, who accompanied her the rest of the way.  As the three came upon the house, they met up with Jason who had left his car and run through an adjacent field to reach the house.

“There was absolutely nothing we could do. We couldn’t get any closer, because the fire was so hot, we couldn’t save anything, we were helpless,” Trish said.

“We just stood there, in our neighbor’s driveway across the street and watched our house burn,” Jason said.

Even as they watched, the Grabberts’ were hopeful that the fire wasn’t too severe.

“From where we were at our neighbors’, the front of our house didn’t look too bad.  The brick was all intact but when we saw our box spring come out the window, that’s when we knew the damage was horrible,” Trish said.

Trish estimates that around 12 fire departments responded to the blaze which was aided by dry conditions and wind.

“The fire departments had a hard time getting our neighbor’s house under control.  We really appreciate all the volunteer fire fighter units that came out, but it took overhead equipment from the Rockford Fire Department to spray water down over the house.  It fire burned so fast, so hot,” Trish said.  The fire started in the garage of the Grabberts’ next door neighbor.

“The fire marshal told us that there were three different fire agents in her garage and that because the fire burned so quickly and with such intensity, he couldn’t determine the cause,” Jason said.  “The force of the fire was so powerful that it blew out windows and the tires of our neighbor’s car which was parked in the garage.”

The fact that Trish and Jason were at work when the fire started was a small blessing for the couple.  “Since the fire started in our neighbor’s garage, our garage was the farthest point from the source of the fire.  When the firemen saw the blaze advancing, they quickly pulled my boat and riding lawn mower out of our garage,” Jason said. 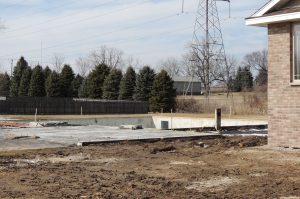 A foundation is all that remains of their neighbor’s house after the fire. The Grabberts’ newly rebuilt home is to the right. (Photo by Lynn Conner / for Chronicle Media)

Jason describes the moment when the gravity of the situation finally hit him.  “We were in the Fire Marshal’s car and he said to us, ‘It seems like you guys are handling this really well, considering you don’t even own a toothbrush right now.’  That’s when we just looked at each other and reality set in,” he said.

After the fire, the Grabberts tried to salvage whatever they could from the burned-out ruins of their home.  “Because the firemen had to use so much water to extinguish the blaze, our possessions that weren’t burned by the fire were damaged by water,” Jason said.  Still, Trish and Jason had a few happy surprises while sifting through the debris of their house.

“Less than a week after the fire, we were going through the house with the guys from Dyna-Kleen, trying to itemize our possessions for the insurance company when one guy brought out my jewelry armoire,” Trish said.

“It was charred and burnt and I didn’t think there would be anything salvageable inside.  One of the cleaning guys knocked the lid off with a hammer and I looked inside and thought, ‘Oh, my gosh!’  Here was some of my good jewelry and Jason’s wedding ring sitting down in the crevices of this jewelry chest completely unharmed,” she said.  Trish and Jason were also stunned to find that a small framed painting hanging in their spare bedroom had also survived the fire intact.

“The hardest loss for me to accept is that my kids’ baby and childhood photos are gone,” she said.

Despite the devastation that the fire brought to the Grabbert family, no one was injured or killed in the blaze.  “In the end, anything is replaceable,” Trish said.  “No one lost their life.  If the fire had happened the next day, we would have had Ava, our granddaughter, over and we would have died ourselves in order to get her out.  This has been a traumatic experience, but we can handle whatever this challenge entails because nobody was hurt.”

In the days, weeks and months since the fire, the kindness and generosity of family, friends, neighbors, co-workers and even total strangers have helped the Grabberts’ rebuild their lives.

“While the fire was still active, our across the street neighbors, Jan and Harold opened their home to us and our family.  Anything we needed, chairs, water, bathroom facilities, they provided.  They were amazing,” Trish said.  As word of their house fire hit social media, Trish said that extended family members came and brought food and coolers of drinks.

“That day, we met a lot of neighbors that we had seen, but never talked to.  Everyone was stopping and saying how sorry they were,” Jason said.  “That’s not how you want to meet your neighbors, but everyone went above and beyond; they were wonderful.”

“The subdivision to the east of us, River Key, had a block party shortly after our fire and they took up a collection for us and our neighbor.  They were very, very generous and we don’t know any of these neighbors.  Our neighborhood also collected funds for us.  It was truly amazing,” Trish said.  “We had no idea how generous people could be.”

Trish, who works at William Charles Construction, and Jason, who is employed at Sugar River Machine also had lots of support from their employers.  “We were both given paid time off after the fire and when I returned to work, there were gift cards on my desk every day,” Trish said.  “The operations manager at Jason’s work came over with five days of work clothes for Jason.  They brought everything, pants, shoes, shirts, socks and underwear,” Trish said.  “You don’t realize that with a fire of this size, you don’t have the most basic needs.”

Finding a place to live while their home was being rebuilt could have been a long, stressful process if not for an astonishing show of generosity by total strangers.  Through mutual acquaintances, the Grabberts’ met Bill and Sue LaFever who own a home in the same neighborhood.

“Bill’s mother had recently passed away, so the house was vacant,” Trish said.  “He and his is siblings agreed that they wanted us to stay in their mother’s home, rent free, until our house was rebuilt.  Bill said that his mother, whose name was Trish, always wanted to help people.  So, we have been living in a beautiful, fully furnished home while ours is under construction.  The LaFevers are wonderful people and they have truly been a blessing to us.”

In appreciation for the generosity from their friends, neighbors and employers, the Grabberts are donating the money that they would have paid in rent to charity.  They hope that their gesture is a way of “paying if forward” to others who may be in a difficult situation.

“You watch the news and all you see is negative, negative, negative; all the bad stuff going on in the world,” said Jason, choking up.  “And even though something bad happened to us, all the good things people did just really restored my faith in humanity.”

Trish added, “You can never be too grateful for what you have.”