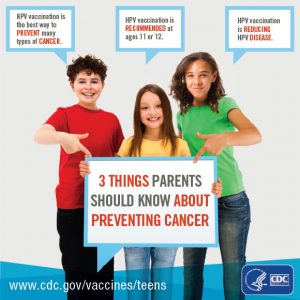 As another school year nears, vaccinations are on many parents’ lists, along with school supplies, and many in the health care field think it’s a great time to remind everyone of some of the optional vaccines that are available.

“The flu vaccine should be available in the next few weeks and we can vaccinate from six months of age up,” said Angie Phillips, Tazewell County Health Department director of clinical services. “Kids under six months are not vaccinated, so people who are around children that age, we recommend they are vaccinated.”

“Every year they choose two A and two B viruses based on what they see in other parts of the world,” Phillips explained. “When it’s early spring here, that’s when the other side of the world is having their flu outbreaks, and they’ll look at how things went here.”

Phillips said it’s important to seek the quadrivalent vaccine, because some providers offer the trivalent, which addresses only three of that year’s strains.

There are also high dose flu vaccines for people 65 and over, and there are egg-free varieties for people with egg allergies.

In recent years, attention has been drawn to the human papillomavirus (HPV) vaccine, and that attention hasn’t always been positive, because HPV is sexually transmitted. Parents of young teens are sometimes shy to vaccinate their kids against HPV for that reason.

“When I had my daughter, I bought her the safest car seat I could find. I’ve made her wear bicycle helmets, taught her fire safety at home, all that stuff,” Wendy Martin said. “I feel like the HPV vaccine is just another way of keeping her safe in life.”

Phillips said early inoculation against HPV is best because the immune systems of preteens and young teens is optimal.

“It’s a series of two to three shots. If they receive the first shot after they are 15, they need three shots instead of two,” she said. “The HPV vaccine is a very much a cancer preventative. It can prevent reproductive, head and neck cancers that sometimes don’t show up for years.” 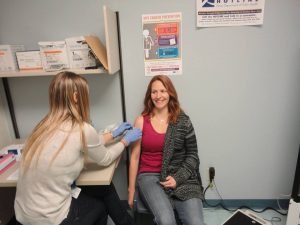 According to the Centers for Disease Control, more than 78 million Americans are HPV carriers, and the majority of them are in their late teens and early 20s. Vaccinating against it early helps guard against the virus later, when kids are most vulnerable.

Most young people in their late teens and early 20s are at risk because they often spend time together in close quarters, such as dorm rooms and military barracks. This is why another vaccine, the meningitis B vaccine, is also critical, said.

“Meningitis B is not required (by schools), however there have been some outbreaks, and we offer that vaccine in addition to the other meningitis vaccines,” Phillips said. “It can be fatal within 24 hours and it has a 10-15 percent fatality rate. People also lose their limbs, their hearing or have brain damage.”

Most insurance companies cover the cost of a wide range of vaccines. Medicaid also covers most vaccines, particularly for children. For those with no health care coverage, the Peoria, Woodford and Tazewell county health departments offer reduced charges.

To find out more about vaccinations and upcoming clinics, it is best to visit each of those county’s websites, although Phillips said non-residents are welcome at each of those clinics.