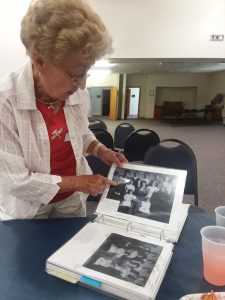 Mary Ellen Kaesebier Martin looks over an early 1990s photo of Fred Peplow with his wife and 10 daughters. Martin’s grandmother Lydia Peplow Osborn is in the top row. Because of the number of daughters born in the Peplow family, very few descendants carry the surname. (Photo by Holly Eaton/for Chronicle Media)

The first time the Peplow descendants held a family reunion, a passenger train still ran from Minier to Peoria every evening. That was in 1930.

This year, on July 28, the relatives gathered for their 90th, and final, annual family reunion.

“Hello, everyone, I’m Gary, the good lookin’ one in the family. I’m here at the last reunion, as the last Peplow,” Gary Peplow said when he stood to introduce himself. “When I heard about this, I thought, ‘I had better go to this one, this will be my last chance.”

Of those who gathered at St. John’s United Church of Christ in Minier that afternoon, Peplow was the only one at the reunion with the original surname. Most of the last names changed long ago, due the number of women who were born into the family early on.

“This is my grandmother, Lydia Peplow Osborn,” said Mary Ellen Kaesebier Martin, pointing out a young, stoic woman in an early 1900s photo. “Her father was Frederick Peplow.”

Fred wasn’t difficult to find in the photo, he’s the only man it. Looking not much older than 40, Fred is flanked to his left by 11 females. One is his wife, the rest are his daughters, who appear to range in age from around 4 to 18.

Fred and his siblings, Alvina, Wilhelm, August, John, Albert, Fred and Herman, were born between 1840 and 1864, in Germany to Christopher Johan Gottlieb Peplow and Charlotte C. Hamlow. Charlotte Peplow moved to the United States in 1877, following the death of their father.

From the seven siblings, 30 children were born, so it would be safe to assume that the Peplow reunions of the 20th century were heavily populated, particularly with young cousins.

“It was always fun over there, playing ball with all of the cousins,” Ron Toepke, of Pekin, recalled. “It was always a joy to come to the Peplow reunion.”

The Toepke name likely rings a bell for those living in Germantown Hills and Metamora. Ron’s brother Randy retired in 2016 as superintendent of Metamora Township High School, where he also had previously served as the athletic director, dean, assistant principal and principal.

The Toepke branch of the Peplow tree developed when Wilhelm’s daughter Erna married Ludwig Herman Toepke, who then raised seven sons and four daughters of their own. Two sons survive — Lyle, 91, of Honolulu and Harold, 97, of Pekin.

“As the saying goes, ‘All good things must come to an end. This note is from the youngest child of my mom, Erna, one of the four Peplow sisters,” Lyle wrote. “I want to thank all of you who so steadfastly continued this wonderful family tradition for 90 years.” 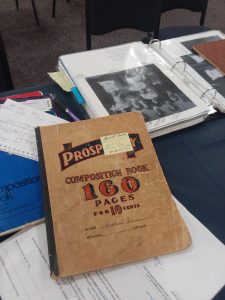 When the Peplow family hosted its second annual reunion in 1931, members began keeping journals that included attendance, funds and meeting minutes. They also followed the basic rules of order during meetings, by maintaining quorum, voting by motion and reading reports. The journals will be given to a local genealogical society for safe keeping. (Photo by Holly Eaton/for Chronicle Media)

At 91, Lyle jokingly admitted that he can’t recall his first reunion, but said that, thanks to all of the annual gatherings, he wasn’t aware there could be so many flavors of fried chicken. He then signed off, “With love, Aloha.”

Lyle’s Hawaiian farewell invited a brief moment of silence to the room. It was a small, though pleasant, reminder of how widespread the multitude of Peplow descendants had become, and from such a small group of 1800s German immigrants.

Reunion secretary Kathryn Toepke McNeely and her son Rick closed the reunion in the usual, legislative manner in which it traditionally began and ended. Kathryn read aloud the minutes of the 2018 reunion, which included the treasurer’s report and a vote to discontinue the reunions at the end of 2019.

“This was one of the things that was ingrained in us at an early age. How things were governed, how things were run,” Rick McNeely said as he closed the reunion. “Many of us have taken that with us through life, and it’s helped us become successful.”

The close of nearly a century of family gatherings was bittersweet for those who were there, most of whom were over 70. Because all of them were once children, carefree kids who played together, at least once a year, as their parents chatted over plates of fried chicken.

Carol Willis of Sarasota, Florida fought back tears as she recalled the gift exchanges, comedy skits and group games that were arranged for the children every year.

“I’m a little emotional, and I have to say that the Peplow reunions will always be amongst my very favorite memories of my childhood,” she said.