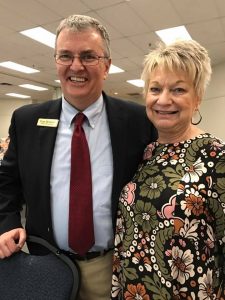 Illinois House Rep. Thomas Bennett poses with retired Eureka School teacher Sara Kaufman. Bennett has been an active proponent of the Eureka Library elevator project, and was at Eureka College Jan. 26 for the library’s Elevate Gala, a fundraising event aimed at garnering the final dollars needed to complete construction. (Photo by Holly Eitenmiller/ for Chronicle Media)

Every Friday, Brantley Williams and his grandmother, Melita Williams, visit the children’s room on the lower level of Eureka Library. There’s only one thing between the 4-year-old and his favorite Pete the Cat books — a simple flight of stairs.

Brantley was born with Spina bifida and steps are barriers for the wheelchair-bound reader. But each Friday, Melita carries him down the stairs while librarian Robin Ritchie follows with Brantley’s wheelchair and other items in tow.

In early March, however, that will all change.

Brantley, and all other library patrons with physical disabilities, as well as parents with strollers, baby seats and the like, will handily access the children’s library by elevator, thanks in much part to the generosity of the community. 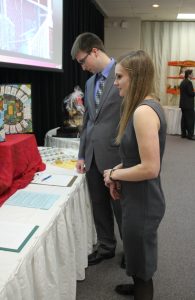 City of Eureka Alderman Eric Lind and his girlfriend, Taylor Strehlow, eye items up for auction at Eureka Library’s Elevate Gala on Jan. 26. Among the 65 items up for bid were Ben Zobrist signed Louisville batting gloves, a week’s stay at South Padre Island, Texas and a 19th century wood yard winder. (Photo by Holly Eitenmiller/ for Chronicle Media)

On Jan. 26, Eureka Library hosted its final fundraising event, Elevate Gala, at Eureka College’s Cerf Center in its campaign to raise the final dollars necessary to fund the $317,000 project.  The elevator will be located on the east side of the library, and improvements to the children’s area are also included in the plan.

“We’re really excited about tonight, and we don’t have far to go to reach our goals,” Eureka Library program coordinator Cindy O’Neill said, as guests began to fill the Cerf Center’s Terrill Room that evening.  Brantley, dapperly dressing in a suit and tie, arrived early with his mother and grandmother. 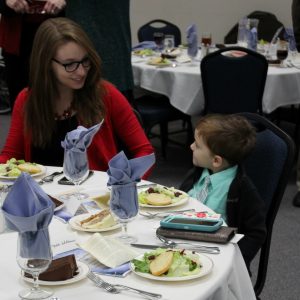 Brantley Williams, 4, humors his mother, Olivia Williams before dinner at Eureka Library’s Elevate Gala, a fundraising event held at Eureka College on Jan. 26 to bring in the final dollars needed to finish the library’s elevator project. Brantley is wheelchair-bound due to Spina bifida, and will be one of many library patrons to benefit from the addition. (Photo by Holly Eitenmiller/ for Chronicle Media)

Linen covered numbered tables were set for the crowd of more than 160 ticketholders, who paid $50 each for dinner and the opportunity to bid on 65 auction items. Along the room’s perimeters, 12 tables featured 53 silent auction items.

A vintage Cuddle Cups Circus display, initially donated to the library, was up for bids in the silent auction. The festive red and yellow metal shelving unit was among the collection of the late Harlen ”Rollo” Pierson, a well-known local professional clown. The family granted permission for its auctioning.

Eureka Library Director Ann Reeves said less than $10,000 of the project goal remained at Gala’s beginning. By night’s end, only $320 remained. “We have a donor who’ll give the rest,” Reeves said.

Having the lion’s share of funding before the Gala, made for a relaxing night for Reeves and fellow library employees and volunteers who coordinated the festivities.

“It was just a great evening for us. We weren’t under a great amount of pressure to make money and it turned out to be great fun,” Reeves said. ”This is a very generous community.” 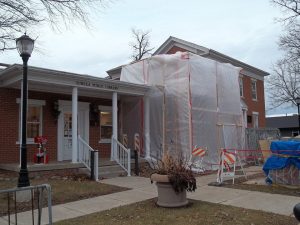 Construction continues on Eureka Public Library’s elevator installation. Once complete, library patrons will handily access the lower level children’s library. Currently, the only access to that area is by stairs, which are difficult for handicapped visitors, as well as parents with strollers and other sundry gear. The elevator is slated for completion in early March. (Photo by Holly Eitenmiller/ for Chronicle Media)

Tax dollars saved, donations and fundraisers paid for the project, she said. Among the many private donors, several gave between $1,500 and $10,000. Eureka Community Bank and Heartland Bank and Trust Community Support Fund, along with Illinois Prairie Community Foundation, donated more than $10,000.

“So many times there’s a need here (in Eureka) on a large level, but before you ask for it, people figure out what’s needed and how to get it taken care of,” Reeves said. “The churches work together here too, they communicate with each other and the community to get things done.”

Reeves said the library plans to host an open house once the project is approved by inspectors and the elevator is in use. The elevator has been installed, and crews are working now to finish electrical work and complete carpentry projects and improve the children’s section with fresh paint and shelving upgrades.

“We’re happy, and we can breathe deep now that all the funding is in place,” Reeves said.  ”We don’t have any problem moving on from here.”