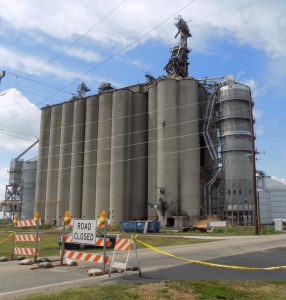 An elevator at Eureka Grainland Cooperative elevator exploded at around 6:15 a.m. on July 30. The main structure has since been demolished. Eureka Goodfield Fire Protection District Chief Craig Neal said the explosion certainly would have killed and severely injured Grainland workers if they had been present. (Photo by Holly Eaton/for Chronicle Media)

Late in the afternoon of Friday, June 27, Eureka Grainland Cooperative workers agreed to show up for work on Monday at 7 a.m., an hour later than usual. They had a busy week ahead, and figured a little extra personal time would be a nice way to start a hectic week.

“I thank God for watching over everyone. The employees that were supposed to be there at 6 a.m., but came in at 7 (a.m.),” Neal said. “That was a very dangerous situation we had to fight, and I’m thankful for the men and women in our district who responded, and all of the other agencies that responded.”

On Oct. 12, Eureka Grainland General Manager Jeff Brooks presented Neal with a $15,000 donation to the fire protection district, to commend Neal and his department “for their professionalism and valor that was exhibited during our recent explosion.”

Grainland donated $5,000, which was matched by a Growmark Enduring Commitment fund. A second matching donation was made by CoBank’s Sharing Success program, to total $15,000.

“I’m thankful for Jeff Brooks and the board for their generous donation, and by going the extra mile for giving us extra money,” Neal said. “I’m very humbled by this, and a portion of the money we received is going to be distributed to the other agencies as a token of appreciation for helping us that day.” 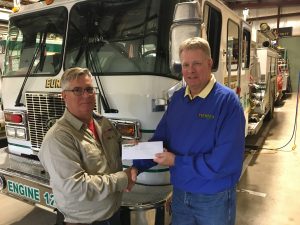 Together, through constant communication with Brooks, responders resolved the myriad of issues that resulted from the explosion.

“The difficult situation was knowing where the fire was, knowing where all of the electrical panels were located, we didn’t know the stability of the structure, if anyone was trapped inside or if there would be another explosion,” Neal said. “We had 69,000 volt lines right by there and children were just going to school.”

Ameren shut down power to the facility, and TP&W railway ceased operations along the railway that hems in the Grainland to the south. In the meantime, local businesses and emergency response agencies provided responders with food and beverages.

“Hardees of Eureka, the Salvation Army and the Red Cross all provided us with food and drinks and we are so thankful to them,” Neal said. “The EMS staff were set up for rehab and some staff came into make sure an ambulance was covered if anyone was hurt.”

Brooks said the main structure has since been demolished, and when Grainland assumed operations Sept. 10, the facility’s capacity for the year was cut by half.

“We were really effected, it cut our speed down and we had to open a little later, but we were able to open,” Brooks said. “We are getting plans in place, and we might change things around, but for now, we’re working around it.”

Once Neal divvies out a portion of the donation to the other districts, he plans to use what’s left to buy additional equipment for a new rescue fire engine that’s due to arrive by March 2019.

“We have a new engine coming and we’ll put the money toward some of the new equipment for the new rescue engine,” Neal said, “but the success of getting the fire extinguished … I’ll say this, every community needs to support their fire fighters.

“We’re all volunteers and I can’t give enough praise to the men and women who responded.  Jeff said he was amazed by how well we all worked together. No one, died, no one was injured. We’re all truly blessed.”