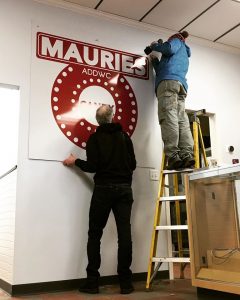 ADDWC President Keith McArdle (left) and maintenance coordinator Tim Smith hang a Maurie’s Candy sign inside the store at 116 N. Main St. in Eureka. The shop is expected to open at the end of February, and will feature Maurie’s signature coffee blend,  homemade candies by the pound, and the sweetshop’s signature recipes. (Photo courtesy of ADDWC)

S’more Maurie’s. That’s what Keith McArdle is aiming for when the candy store on Main Street opens at the end of February — that after folks stop by once, they’ll keep coming back for more.

“The chocolate fudge is, I have to tell you, it’s addictive,” he admitted.

McArdle is president of The Association of Developmentally Disabled of Woodford County. He and his wife, Julie, have begun testing out the recipes that came with the purchase of the candy store that first opened in Pekin in 1941.

The purchase of Maurie’s Candy came in September, after a very brief deliberation between McArdle and ADDWC staff. The group’s long-running recycling business had suffered serious budget deficits in recent years, and there was talk, then of shutting the whole program down.

When word of its closing came around, the community came nipping at the Eureka City Council’s heels and they voted in December to pull $30,000 from the city’s general fund as a stop gap. The funds will be paid in quarterly installments, and, come November, both sides will convene to determine if more funding will be needed in 2021.

McArdle is hoping they’ll need less, if any, money drawn from municipal funds down the road, once Maurie’s Candy ADDWC gets going. That’s the vision that brings him, his wife and the staff to the former Peking Garden restaurant to ready the store for opening day.

And it’s sweet dreams for ADDWC’s employees, who find meaningful work through the recycling program. The agency employs more than 30 disabled Woodford County adults, and the candy store will give many of them the chance to enjoy direct interaction with their customers.

Instead of flashing a friendly wave from the curb, they’ll get to shake hands with people and exchange friendly smiles and warm words with those who come to buy the treats they’ve helped make themselves.

“Our workers are thrilled to get the chance to work here and meet with the public,” McArdle said. “They’ve only known us through our recycling program, but to be known through a candy store is really something they’re excited about.”

Since closing on the building at 116 N. Main St., McArdle and his team have worked full-tilt at converting it to an old-fashioned sweets shop. Much of what remained of the Asian restaurant has been sold at auction, while some discarded items, a lot of ragged cafe chairs, have been repurposed.

All of the kitchen equipment that was acquired in the sale has been brought over from Pekin, including a caramel corn cooling unit and a pair of No. 20 Salvage Bros. candy stoves with copper kettles and large wooden paddles. The McCardle’s are going to take a shot at making popcorn in the kettles, and they’ve been experimenting with most of the recipes that came with the Maurie’s name.

“We’re actually at the fun stage and we’re able to practice now,” McArdle said. “On Super Bowl Sunday, we made, what we think, is the perfect popcorn. We’re thinking, since Maurie’s didn’t have kettle corn, maybe we’ll go ahead and start making that.”

There’s also a special blend of coffee in the works. Not long ago, staff took a trip to Peoria Heights, where James Croft, owner of Leaves N’ Beans Coffee helped them craft a Maurie’s roast that will be sold exclusively in Eureka.

“There’s some fun stuff here that goes back to childhood, and we’ve had some special requests from people that we’re trying to fill,” he said.

Most importantly, though, everyone involved in creating the visage of a vintage confectionery, are hoping it will become a place where the community will have the chance to get to know the ADDWC workers. It’s an opportunity, as well, for them to continue to have meaningful work at a time when the prospects of such were beginning to dim.

“Our clients are so very thrilled about the candy store and about being here and being a part of it,” McArdle said. “We have to make sure we put our best foot forward here, right now, to make our individuals shine when the doors open for the first time.”

Keep up with news and events by visiting their Facebook page, “Mauries.” For information about ADDWC, visit www.addwc.org.