Though the Illinois Department of Transportation issued a permit for the Metamora digital welcome sign, the department will not allow the village to advertise anything aside from non-profit groups, a disappointment for those who’d hoped to promote shopping and dining in Metamora.

Though the ceremonial red ribbon may be long since gone from the Village of Metamora welcome sign, it still remains covered in bureaucratic red tape.

In 2013, the village and the Metamora Area Business Association erected the digital sign in hopes of promoting local shopping and dining, as well as other goings on in the village.

With donations from the Old Settlers Association, and help from a number of volunteers, the sign was pitched, with permission, on the Kern’s property at the west side of town along Illinois 116.

Then came the Illinois Department of Transportation, and newly-elected mayor Ken Maurer found himself mired in controversy.

“They said I would have to get it zoned commercial, they also said it had to be within 100 feet of another business,” Maurer recalled. “They even threatened to come in with a bulldozer and bulldoze it down.”

Why? Because if IDOT doesn’t enforce the rules, Illinois could lose all of its federal highway funds. At least that’s what one IDOT official said. So, to prevent the state from losing around $1.45 billion from the Federal Highway Trust Fund, IDOT fully flexed its jurisdictional muscle.

“Then they timed it, and there wasn’t enough time between one message to the next,” Maurer said. “There had to be so many seconds between each one. Somebody sat there with a timer.” 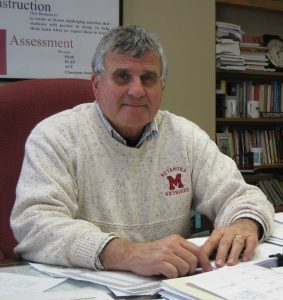 Village of Metamora Mayor Ken Maurer said he has received a number of phone calls from the Illinois Department of Transportation representatives who said the sign would simply be demolished. IDOT ultimately approved the sign, with the caveat that it will be removed if any of the department’s stringent rules are violated.

To understand the rules and regulations set forth by IDOT regarding signage, one must first wade through volumes of wordy administrative codes to find out what to do and not to do.

All the village wanted was a simple digital sign to promote the town to passersby. In the end, after much bulldozer-dodging, Metamora was granted a permit last year, but IDOT says they’re watching.

Which means the village can’t promote lasagna at The Flame Restaurant, or any of Geo’s Pizza’s steak sandwich special, or the Sip ‘N Sniff at the Old Mill Vineyard.

“We can do little things, like fundraisers, things for the schools, the Metamora Thespian Society,” Maurer said. “I’m not sure about Snyder Village. It’s a retirement home, but it might get nixed if it’s for-profit.”