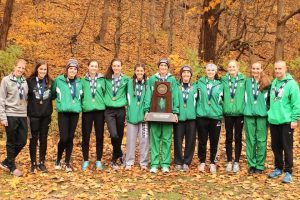 The Eureka High School girls cross country team ran off with the IHSA Class A Championship at the Nov. 3 championship meet, in Detweiller Park. Hornets coach Olivia Morris said all of the runners beat their personal bests, with Emma Argo taking first place with a time of 16:59. (Photo courtesy of Robyn Wiegand)

For the first time in school history, the Eureka High School girls cross country team ran off with the IHSA Class A Championship, in part, due to the fast footwork of Hornet’s senior Emma Argo.

Not only did Argo earn the Class A individual title, she tagged her second straight individual crown and boosted the team into its first championship. Argo contributed 84 points to the No. 2-ranked Hornets score, beating out Rock Falls and Tolono Unity for the win.

“I was very impressed with the girls. They showed up and did exactly what they were supposed to do,” Hornets coach Olivia Klaus Morris said. “All week we had a game plan, as far as how we wanted to go out and how we wanted to race, and they executed it perfectly.”

All seven runners beat their personal bests; Argo, Fogo, Wiegand, Lexi Grober, Elle Knapp, Anna Perry and Nora Robinson. It also helps that the meet is local, Morris said, making it very convenient for family, friends and fans to show up and cheer the girls on. 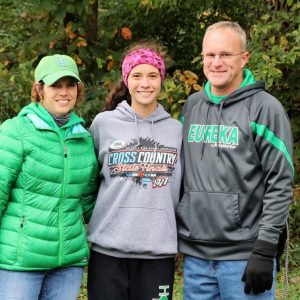 On Nov. 3, Eureka High School senior Emma Argo, pictured with her parents, Susan and Andy, earned her second straight individual crown at the IHSA state championship meet in Detweiller Park. With a time of 16:59, Argo bested the second-place runner by 19 seconds, and the Hornets brought home their first team state championship. (Photo courtesy of Susan Argo

“We knew we had a chance to win and that was on the front of their minds, and I think the fans were really excited knowing this,” she said. “At every part of the race, they had people rooting for them and telling them how many were ahead of them, and what their times were.”

As with most coaches, Morris wasn’t sure how the runners would perform. “I knew that they all had potential, it’s just a matter of showing up and, when it starts to hurt, keep pushing,” she said.

Following a successful stint at Eastern Illinois University, Morris returned to Eureka, and worked as a volunteer for the Hornets, until she was named coach in 2017.