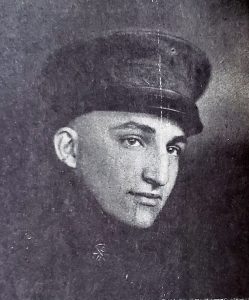 Benjamin F. Haecker was the first Eureka soldier to die in service overseas. He served in World War I, and the Eureka American Legion Post 466 was named in his honor in 1919. (Photo courtesy of Eureka Library)

Dieting is nothing new to the U.S., but various diets fly in and fade away. So what’s trending? What really works? Learn the pros and cons, the evidence and the safety of these diets, and walk away empowered to lead a healthy lifestyle.

Diabetes clinics are informal but informational walk-in programs with a different topic each month designed especially for persons living with diabetes. There is no cost to attend this program and no registration is necessary.

For more information on this program or upcoming events, please visit us at go.illinois.edu/LMW, or contact University of Illinois Extension Nutrition and Wellness Educator & Registered Dietitian, Jenna Smith by phone at 309-663-8306 or email her at jesmith6@illinois.edu.

The Eureka Public Library, 202 S. Main St., will be displaying a poster exhibit titled World War I: Lessons and Legacies during the month of March. The exhibit explores the history of World War I and its lasting impact on American life.

Sparked by the assassination of one man, the war eventually included the forces of the world’s major industrial powers (over 18 countries in all) and led to pivotal changes in America’s culture, technology, economy and role in the world.

An educator’s guide to the exhibit will be available for homeschool families and anyone interested in learning more about World War 1.

In addition to the poster exhibit, the library will have a small display on two local World War 1 soldiers who gave their life for the cause.

Frank Harold Richardson of the U.S. Army Aviation Department died in a training accident in San Antonio, Texas, on Sept. 12, 1918. His training was nearly complete, and he was expecting to be transferred to France shortly.

Benjamin F. Haecker, a wagoner in the 108th Ammunition Train, 33th Division of the U.S. Army, died in France on Nov. 24, 1918. He died from meningitis after serving on the front lines. He was the first Eureka and Olio Township soldier to meet death in service overseas.

In 1919, the Benjamin F. Haecker American Legion Post in Eureka was established and named in his honor.

A special program on World War 1 will be held at the library on Tuesday, March 24 at 6:30 p.m. Peoria historian Bernie Drake will be presenting “The Paris Peace Conference of 1919: The Price We Pay Today.” The program is free. Attendees should register by calling the library at 309-467-2922.

The poster exhibit was organized by the Smithsonian Institution Traveling Exhibition Service and the National Museum of American History, with funding from The United States World War I Centennial Commission and the Smithsonian Women’s Committee.

Voters can fill out their ballots early for upcoming primary during one of the early voting dates and times at the Woodford County Courthouse, 115 N. Main St., Room 104, Eureka.

The El Paso-Gridley Community Unit School District 11, serving residents in Woodford, McLean and Livingston counties, is asking voters if the district should issue $20 million in bonds for making renovations and repairs and equipping school facilities.

Heartland Community College is showing an increase in both headcount and credit hours from Spring 2019 to Spring 2020.

Enrollment numbers at Spring 20 Census Day (the 10th day of classes) show an increase of 3.2 percent in the number of Heartland undergraduate students and a slight increase of 0.3 percent in number of credit hours they are taking.

“One promising trend in these Spring to Spring comparisons is the number of returning students we are seeing this semester,” said Sarah Diel-Hunt, vice president of Enrollment and Student Services. “These are students who have returned to Heartland after a gap of three or more semesters in their enrollment. Acknowledgement should go to enrollment services staff for their efforts to design strategies to reach out to this group of students and facilitate their return to complete certificate and degree programs.”

A record-setting $22,284.49 was raised for the OSF HealthCare Children’s Hospital of Illinois during Illinois Wesleyan University’s annual TitanThon .

TitanThon, whose slogan is “For The Kids,” is a registered student organization (RSO) with a mission to provide monetary and emotional support to the children and families of the OSF Children’s Hospital of Illinois.

TitanThon, which partnered with Greek Life organizations and other RSOs across campus, spent hours each week during the summer and first semester planning the Feb. 1 main event. During the event, which lasted from 4-10 p.m., participants pledged to stand on their feet for the entirety of the evening in honor of Children’s Hospital patients and families.

The event, which is a celebration of the year’s fundraising efforts, also included many activities that encouraged people to donate to the Children’s Hospital.

One of the events included painting rocks to donate to the Children’s Hospital garden. Other events included Zumba, choreographed dances, as well as activities that encouraged students to fundraise.

Most programs conclude with a big event ranging from four to 46 hours in which the participants hear stories from Miracle Families, participate in activities, and fundraise for their local children’s hospital.