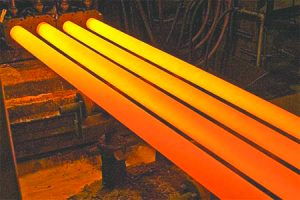 Continuous cast-iron products are created at Dura-Bar in Woodstock. A former 30-year employee of the company has been sentenced to a year in prison for stealing trade secrets from the firm and planning to give them to a rival company in China. (Dura-Bar photo)

A 30-year employee of a McHenry County manufacturing firm has been sentenced to a year and a day in federal prison for stealing trade secrets while planning to work for a rival company in China.

Robert O’Rourke, 59, of Lake Geneva, Wis. was convicted early this year by a federal judge on seven counts of theft of trade secrets.

“Theft of trade secrets is a serious offense with wide-ranging consequences to the victim companies and the United States economy,” Assistant U.S. Attorney Shoba Pillay argued in the government’s sentencing memorandum. “A would-be insider thief must understand the consequences of stealing their employer’s trade secrets in order to benefit competitors, particularly when those competitors are based in China.”

According to evidence at trial, O’Rourke worked for Dura-Bar, a Woodstock-based manufacturer of continuous cast-iron products, since 1984. O’Rourke held the positions of plant metallurgist, quality assurance manager and salesperson, and helped the company develop business in China and other locations. In late 2013, O’Rourke began several months of negotiations to take a similar job with a rival firm in Jiangsu, China.

In September 2015, while still employed at Dura-Bar, O’Rourke accepted the job offer in China. He then downloaded electronic data and documents belonging to Dura-Bar without authorization two days before officially leaving the company. The following week, he packed up the proprietary information and went to O’Hare International Airport in Chicago to board a flight to China. Federal authorities intervened at the airport and seized the stolen trade secrets from O’Rourke before he could travel to China.