The 1908 race riots in Springfield inspired a national movement, which later led to the founding of the NAACP. Credit: Abraham Lincoln Presidential Library

Editor’s Note: This article is a compilation of multiple stories written by former (Springfield) State Journal-Register reporter Pete Sherman for the special section “Outrage: The events and aftermath of the 1908 Springfield Race Riot” that appeared in the June 1, 2008, edition of The SJ-R to mark the 100th anniversary of the riots.

One of the pre-eminent civil rights organizations was born from one of the worst moments in Springfield’s history.

In August 1908, a white mob, thwarted in an attempt to lynch two black inmates in the Sangamon County Jail, went on a rampage. They destroyed dozens of black-owned businesses and homes in Springfield. Two black men were lynched and five white men died during the riot, with dozens more injured. Other deaths connected to the riots happened in the days prior to and after it ended.

Appalled that such an event took place in Abraham Lincoln’s hometown, civil rights activists in New York began meetings that led to the formation of the NAACP.

For numerous reasons, noticeable tension along racial lines existed among the 50,000 people who lived in Springfield in 1908. That tension boiled over in August, having simmered for at least a month after the first of two high-profile accusations were made against black men. 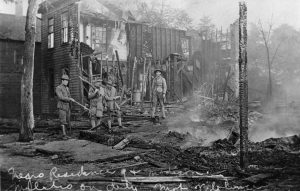 The remains of a black family’s residence at Ninth and Madison streets in Springfield after the rioters stormed the area. Credit: Virgil Davis Collection

On or near June 1, 1908, 17-year-old black teenager Joe James jumped off a freight train passing through Springfield. Police ordered him to leave but James stuck around, and was eventually arrested for loitering.

Late the evening of July 4, when he was granted a temporary parole from jail for good behavior, by James’ own account, he must have wandered drunk and fell asleep outside. That same night, an intruder resembling James’ description entered the Ballard home.

Alerted by his daughter Blanche’s screams, Clergy Ballard, a popular white mining engineer, caught up to the stranger outside the house. The two scuffled and Ballard returned bleeding profusely. He died the next day.

Ballard’s sons and other young men searched the neighborhood and found a sleeping James and beat him senseless. Police arrived and broke up the bludgeoning. James denied knowing anything about the home invasion or Ballard’s injuries, still he was charged with the crime.

Perhaps the rage would have faded and James’ trial would have been held without incident had Mabel Hallam not falsely claimed a black man named George Richardson sexually assaulted and dragged her from her Springfield house near midnight on Thursday, Aug. 13, 1908.

Crowds grew outside Sangamon County Jail, where Richardson was being held, as news of Hallam’s alleged rape spread. The state militia was summoned, but it would take hours for troops to arrive.

Sangamon County Sheriff Charles Werner decided to sneak Richardson and James out of the jail, hoping that if the crowd learned they were gone, people would go home. Werner had a fire station nearby sound its alarm and dispatch its trucks past the crowd. Werner was able to get prisoners out of the jail and into a car that sped off to Bloomington. 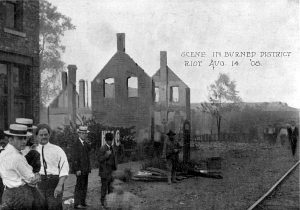 The crowd became incensed when it was discovered they had been duped. A handful of militiamen arrived at the jail and pushed back the crowd. But by then, word had spread the car used to escort James and Richardson out of town belonged to Harry Loper, a white downtown restaurant owner.

Within minutes, thousands assembled in front of Loper’s restaurant. An estimated 5,000 rioters destroyed Loper’s restaurant and torched his car. Then, organized groups methodically decimated dozens of black businesses and tenant rooms with bricks, torches and bullets. Several black residents, either working downtown or who were out at the wrong place at the wrong time, were attacked and beaten.

By 11 p.m., the mob had reached the “Badlands,” where many of the city’s black families lived. The mob spent the next four hours torching roughly 40 black homes, avoiding those lived in by whites. At about 2 a.m., the mob reached Scott Burton’s home. Burton had already lost his barbershop business and had sent his family away.

He was soon beaten and lynched; his body was mutilated for the next half hour with bullets and knives. Only after Col. Richings J. Shand ordered his militia troops to fire low into the crowd shortly after Burton’s lynching did rioting end for the day.

By Saturday morning, Aug. 15, six were dead or dying and more than 100 whites and blacks had been injured. Many black residents had fled the city, although some found shelter in the basements of white neighbors while others organized defensive fronts and patrols. Dozens sought refuge at Camp Lincoln and inside the Illinois State Arsenal, where the militia, sent from throughout the state early Saturday morning, pitched tents.

Stationed at various locations throughout the city, law enforcement officers fanned across town chasing small outbreaks and rumors of outbreaks the second day of the riot.

Organized rioting seemed to be over, but between 7 and 8 p.m., smaller bands began forming. They gathered quickly, struck, dispersed, then gathered somewhere else with little warning. At about 8 p.m., roughly 1,000 rioters approached the Arsenal. But they scattered once militiamen there showed their guns.

The mob reorganized several blocks to the southwest, outside the home of William Donnegan, an elderly black man and retired shoemaker who owned considerable property. He also was married to a white woman. Rioters dragged Donnegan, 84 years old and begging for mercy, out of his home. They slashed his throat and proceeded to lynch him. Militia and city police arrived as Donnegan was being raised. He died the next day. 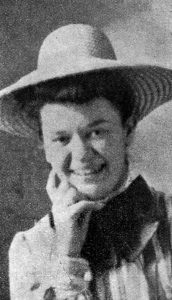 After the 1908 race riot in Springfield, Mabel Hallam admitted she fabricated the accusation that George Richardson, a black man, had raped her. Credit: Abraham Lincoln Presidential Library

Although Donnegan’s murder traditionally is seen as the last act of the two-day riot, hate crimes and threats continued for months.

More than 100 white residents would be indicted on riot-related charges, including murder. Trials were held but only one person — Abe Raymer, an accused ringleader — was charged in relation to the riots (with petty larceny).

Hallam, the young married woman whose rape claim pushed the town over the edge, would later confess she concocted her story (possibly, according to one newspaper, to conceal an affair with a white lover). Richardson had been one of several black laborers working on a house near her home and made an easy scapegoat. He was released from jail and returned to Springfield, eventually retiring from Bell Telephone as a janitor.

In September, James, the 17-year-old boy who had wandered into town in June, was tried for the Ballard attack. He was sentenced to death and later hanged outside the county courthouse.

–BICENTENNIAL 2018: 1908 Springfield race riot led to the creation of the NAAC–