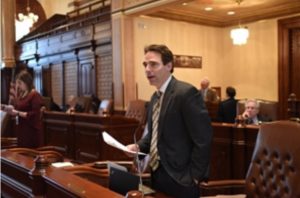 State Sen. Steve Stadelman (D-Rockford) has proposed legislation that would prohibit schools from refusing to provide students lunches or snacks because of a lack of ability to pay or a past due bill. “If a student is standing in line, that student should be served a meal,” Stadelman said. (Photo courtesy of senatorstadelman.com)

Students in Illinois unable to pay for their lunch would not be singled out or treated any differently, according to proposed legislation.

In many school districts, students who are unable to pay for lunch can be stigmatized with a special wristband or hand stamp, and in some cases, even denied lunch.

To stop the practice, known as “lunch shaming” in Illinois, state Sen. Steve Stadelman (D-Rockford) has pushed legislation through the Senate.

“Forcing students to go without lunch is punishing them for the mistakes of their parents,” Stadelman said. “All students, regardless of their parents’ status or income level, deserve to have a hot lunch.”

Under Stadelman’s proposed Hunger-Free Students Bill of Rights Act, every school would be required to provide a meal or snack to a student who requests one, regardless of whether the student owes money for previous lunches and snacks or not. While the school can contact the parents directly to request they pay for the child’s lunch, the legislation prevents the school from throwing the meal out, forcing the student to wear a wristband or otherwise stigmatizing him or her. If the school district is owed more than $500 by a student’s parents and it has made a reasonable effort to collect the debt for at least a year, the district can request the Illinois comptroller withhold tax refunds of parents to pay off the debt, according to the legislation.

“As a state, we can’t force students to sit through class hungry and expect them to learn,” Stadelman said. “This plan ensures all students will be given an opportunity to succeed instead of being forced to learn on an empty stomach.”

Stadelman said at some schools across the country students getting free lunches are put at different tables.

“What the legislation basically says is if a student is standing in line, that student should be served a meal and if there are questions about payment the school district should reach out later to their guardians or parents and try to figure out the form of payment,” Stadelman said.

Some Republican senators, who voted against the measure, said such a policy would be troublesome for school districts and could lead to abuses.

State Sen. Chuck Weaver (R-Peoria) said he recognizes what Stadelman is trying to accomplish with not embarrassing students in need but noted the legislation would allow students who can pay to simply opt to not do so.

“Our biggest concern on this is the fact that this could engage students who do have the ability to pay and then it becomes a mandate locally,” Weaver said.

Republican senators voting against the legislation in the 41-9 vote were: Jason Barickman of Bloomington, Bill Brady of Bloomington, Michael Connelly of Naperville, Jim Oberweis of Sugar Grove, Dale Righter of Mattoon, Chapin Rose of Mahomet, Dave Syverson of Rockford, Jil Tracy of Quincy and Weaver.

Stadelman noted there has been pushback from some school districts concerned about payments, but noted the legislation encourages districts to get parents in need signed up for free and reduced lunches for their children. He said many times the paperwork that would get school districts federal reimbursement for needy students’ lunches isn’t signed by parents or parents simply don’t know about the program.

He noted there is also a U.S. Department of Agricultural program where school districts can fill paperwork out on behalf of parents to recoup lunch money.

Stadelman said he does not foresee people trying to beat the system by not paying for their child’s lunch.

“I guess most parents once they’ve been confronted by the school district will make that payment,” Stadelman said. “But once again, the bottom line is students should be served those meals. Adults can figure out later how to make that payment.”

The legislation now heads to the state House, where state Rep. Letisa Wallace (D-Rockford) is the chief sponsor.

—-  Bill would guarantee lunches, snacks for all Illinois students —-