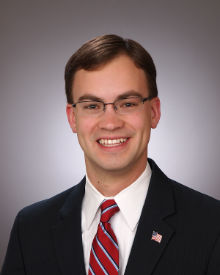 David Olsen (above) was appointed to fill the vacancy in the Illinois House left by Ron Sandack (R-Dist. 81). Sandack stepped down last month.

After being appointed to the House, Olsen stepped down from his post as commissioner for the village of Downers Grove, where he said he helped combat a proposed $58 million municipal center and police station.

“We defeated that plan and now we have replaced it with a plan that is one-third the cost, but yet still achieves the necessary needs to ensure that our police force really is a 21st century force,” Olsen said.

Olsen said he will remain on the College of DuPage Board of Trustees, where he said he has worked to rebuild public trust after financial scandals involving the former president “so that we can be recognized again as the premier community college in Illinois, which is where College of DuPage should be.”

Olsen said that with less than 100 days before the election, it’s crunch time.

“I’m going to be out there doing all the normal campaign fundraising and such, but it really comes down to the grassroots organization.”

“Obviously we’ll get into the details and I look forward to working with, whether it’s Gov. [Bruce] Rauner or folks from the Democratic side of the aisle, to really push forward some of this important reform that our state needs.”

Olsen officially will be sworn in Wednesday in front of his alma mater, Downers Grove South High School.