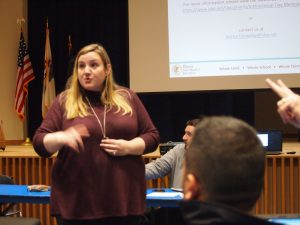 Stephanie Jones, general counsel for the Illinois State Board of Education, talks with educators Dec. 6 in DuPage County after her presentation about the flexibility that school districts now have in determining student attendance. (Photo by Kevin Beese/Chronicle Media)

Picture this: Students going on a family vacation and not being marked absent from school or the school building being closed due to 6 inches of snow falling overnight but no extra day being tacked onto the school calendar.

Sound futuristic? It’s not. It’s in the realm of possibilities for students in Illinois this school year because of changes in school law.

When the state switched to Evidence-Based Funding, it changed the basis of school funding to student enrollment rather than student attendance. That also resulted in the sun-setting of the portion of the Illinois School Code that defined a day of attendance as a minimum of five instructional hours.

“We saw an opportunity to give more flexibility,” said Stephanie Jones, general counsel for the Illinois State Board of Education.

Talking with a group of educators at an ISBE program Dec. 6 at the DuPage County Regional Office of Education in Wheaton, Jones said school-day flexibility can be a huge step forward for special education programs and other students.

Getting at-risk kids, such as youth with anxiety, into the school building at all is tough, Jones said, let alone getting them there for at least five hours.

“It is hard enough to connect with them,” Jones said.

He said the possibilities for school districts under the new attendance flexibility are endless. He cited the use of technology, independent learning and work shadow programs that all could have students considered “in attendance.”

“There is also no mandate to change anything,” Aranowski told educators.

Jones said that if school districts don’t think the non-regimented attendance policy works for their community, they don’t have to use it. 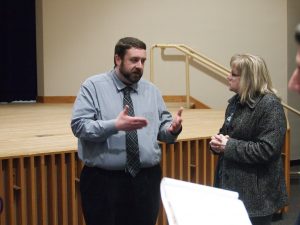 Jeff Aranowski, ISBE’s executive director for safe and healthy climate in schools, talks with educators after a program outlining school districts’ flexibility in determining student attendance. He said students can be considered “in attendance” as long as there is evidence of them working on educational programs. (Photo by Kevin Beese/Chronicle Media)

“If your school doesn’t see this as good for kids, you don’t have to force it on everybody,” the ISBE’s general counsel said.

A student on a family vacation would not need to be marked absent by a district if he or she had evidence of doing school work during the time gone, according to ISBE officials. Schools that had students work on a project electronically on a snow day have the option of counting that as a school attendance day and not having to make it up at the end of the year, the ISBE representatives added.

So does that mean a school district could have its students attend for one hour per day all year long and it would still be in compliance with state law? Technically yes, Jones said. However, she cautioned that students still have to meet state academic standards and districts have their communities to answer to as well.

Aranowski said that the flexibility each district has in determining 176 pupil attendance days is unique to that particular district.

“The flexibility that District A has may not be available in District B,” he said.

Jones said many teachers unions have bought into the freedom that the loosening of attendance rules has meant. Teachers can have extra planning time, more collaborative time and additional professional development with no mandatory minimum for a school day, she said.

“Unions are excited about the opportunity it presents,” Jones said.

However, not all unions are singing the praises of the change. More electronic learning could mean more work and more requirements for classroom teachers, they note.

In fact, unions are one of the forces expected to push legislation in the spring General Assembly session to get the “five-hour school day” language back in the School Code.

The Illinois Federation of Teachers is one of the organizations looking to return school days to a minimum of five hours.

In a statement provided to Chronicle Media, the organization said:

“The IFT believes state statute should continue to define what constitutes an instructional day. We are frustrated that the State Board of Education abruptly twisted the repeal of this provision in the final days of Bruce Rauner’s administration without transparency or time for input. As such, we have submitted a letter outlining our concerns and filed a (Freedom of Information Act) request, which was denied, to understand ISBE’s rationale for this sudden upheaval in policy. We look forward to working with legislators to do what’s best for our schools.”