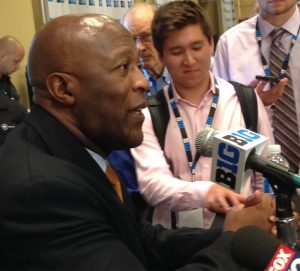 Lovie Smith took the Chicago Bears to the promised land — the Super Bowl — and members of Illini nation are hoping for similar results.

“Naming Lovie Smith as the Illinois head football coach is the first step in taking this program to a place of national prominence,” Athletic Director Josh Whitman said following Smith’s hiring in March. “We will build a program that contends annually for Big Ten and national championships.”

But most importantly, his team has bought in to the new program and Smith’s approach.

“I think he has brought excitement,” said senior quarterback Wes Lunt, set to play for his fourth head coach. “That’s something the program has been lacking for a long time. That change has really excited a lot of fans.

“It’s (also) a feeling we haven’t felt in a while, just as players. For Illinois football forward moving forward I think we’re excited about that.”

Illinois last won a Big Ten championship in 2001. The Illini then endured 11 losing seasons over the next 14 years with five head coaches in that span and four since 2011, including two interim bosses.

For Illini players who’ve experienced the revolving door and program turmoil, it was refreshing to embrace a coach who brings a reputation for success.

“They’ve embraced everything we’ve asked them to do,” Smith said. “As a coach that’s all you want. You want guys to buy in right away and give you a chance. We feel like we have a formula. We have a plan for winning football.”

As the state’s leading public university, Illinois has a large alumni base and deep football roots dating back to the days of Red Grange.

The Illini should be dominating attention and recruiting in a state known for top high school talent. But a series of mostly losing seasons has left the Illini overshadowed by conference and instate rivals.

Northwestern is coming off a 10-win season, beat Illinois in two of last three meetings and has a run of six bowl appearances since 2008.

Even Illinois State, which plays in a competitive level one step down from Illinois, has winning ways with two straight Missouri Valley co-championships and a trip to the NCAA Division I title game in January 2015.

Smith shares Ditka’s distinction of guiding the Bears to Super Bowl appearances. But Ditka was a Super Bowl winner — 46-10 over the New England Patriots in 1985 — while Smith’s Bears fell to Indianapolis 29-17 in Super Bowl XLI in 2007.

And that explains why Ditka remains the toast of the town even 31 years after the triumph.

Still, Smith had nine largely successful years with the Bears with five winning seasons plus one 8-8 campaign, three division titles and one of the NFL’s best defenses of his era.

Smith was fired in 2012 despite a 10-6 season and suffered a similar fate in 2014 after two unsuccessful seasons at Tampa Bay.

The 2016 Illini will feature 12 returning starters — seven on offense, four on defense and one specialist. 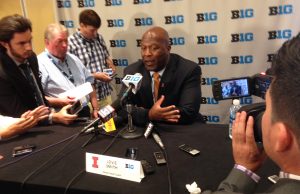 Smith says his definition of success in year one is simple. He wants his team to play up to their full potential.

“We want to play to the best of our ability each week, starting with (season-opening) Murray State,” he said. “I know it’s coach talk but in the end those things will take care of themselves. I feel like we have good players in every position, our depth isn’t what it will be eventually. … We were a five-win team last year, I understand that. I know we’re going to be a better team.”

But won’t get that opportunity until Nov. 26 at Evanston’s Ryan Field in the season’s final regular season game.

“That’s the team we need to beat, simple as that,” Smith said. “Our players acknowledge that. When we start our climb we need to do a better job against them. And we will.”