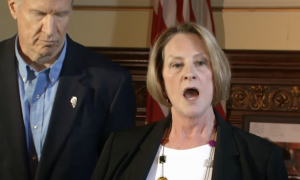 State Sen. Christine Radogno (R-Lemont) and Gov. Bruce Rauner speak at a press conference May 31 after the budget deadline expired in Springfield. (Blueroomstream)

The Illinois budget battle for the 100th General Assembly session ended May 31 like a banquet hall catering disaster.

It all started in January, when the “Grand Bargain” bills, like a 12-course meal, were thoughtfully presented by Senate leaders Christine Radogno (R-Lemont) and Senate President John Cullerton (D-Chicago). The delicacies were rolled out with something for everyone: The high-calorie bills raised revenue, like six new casinos; a soda tax; taxes on services; a $7 billion bond to pay bills; an income tax hike. Others were slimming reforms: Workers compensation tweaks; consolidation of local governments; term limits for Senate leadership; a property tax freeze; no pensions for new lawmakers. The meal was prix fixe: Everything must be included — no substitutions.

But Gov. Bruce Rauner remained in the kitchen, crafting an enormous single recipe — a $37.3 billion budget proposal he rolled out Feb. 15. Some of the ingredients were surprising: Selling the James Thompson Center in Chicago and bumping up personal and corporate income taxes and sales tax. Rauner’s smorgasbord also included pumping up state education funding and MAP grants for universities while renegotiating retiree employee health insurance benefits and some pensions.

The Grand Bargain remained on the table, but before the spring recess, Rauner sent back seven of the 12 grand bargain dishes, like a dissatisfied Bridezilla. Cullerton threw up his hands and abandoned the Grand Bargain menu after Rauner allegedly summoned individual GOP lawmakers into the kitchen and gave them the “thumbs down.”

Meanwhile Senate Democrats began concocting Senate Bill 9, a $37.3 billion budget entrée of their own, adding $5.5 billion in new tax revenue. The recipe reused some of the same ingredients in Rauner’s creation: An income tax hike to 4.95 percent and adding sales taxes to services such as dry cleaning, pest extermination, alarm systems, storage and tattoos. The Democrat budget also called for a $3 billion slim-down across the board and cutting 10 percent to all state universities and community colleges.

The Democrats pulled the cover off their budget on May 23, and the vote fell 33-23 along party lines, with not a single GOP senator even willing to take one bite.

At the same time, in the House Speaker Michael Madigan was doctoring recipes and presenting some of the same ingredients with a new twist: The Thompson Center could be sold — with $50 million going to the city of Chicago to relocate the CTA station. Milder worker’s compensation changes were passed. The House passed a local government consolidation bill and streamlined procurement procedures.

More importantly, in early April, Madigan and the House passed a starvation-diet “Stop Gap II” budget that eeked out $818 million in meager portions to provide a “lifeline” to social service agencies and public universities.

When May 31 arrived, as protestors were dragged out of the Capitol by Statehouse police, Madigan declined to present the Senate’s SB9 budget banquet to the House, announcing Dems would discuss the budget in special extended-session Chicago area hearings June 9.

Rauner called the failure to pass a budget “a complete dereliction of duty by the majority in the General Assembly,” at a press conference. He called the Democrats’ new proposals “phony bills trying to manage phony headlines rather than solving the real problems that are facing the people in Illinois.” The governor threatened to veto the Senate-proposed budget because it did not include a property tax freeze and other ingredients he couldn’t live without.

Radogno said she was deeply disappointed that the Grand Bargain compromises had been scrapped.

“We didn’t get over the finish line,” she said.

The State of Illinois “is now at risk of entering a negative credit spiral, where downgraded credit ratings would trigger contingent demands on state liquidity, further exacerbating its fiscal distress,” S&P Global said in its report. On June 1, both S&P Global and Moody’s lowered its Illinois state bond ratings statuses to one step above “junk.” 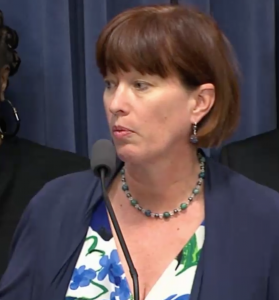 Now the heat in the kitchen has been turned up. Having blown the May 31 deadline, any budget passed will be slapped with a “gratuity charge.” Lawmakers will now require a three-fifths supermajority vote in both chambers, or 39 votes in the Senate and 71 votes in the House. That means buy-in from a reluctant GOP in a shotgun wedding.

The alternative is the House’s anorexic “lifeline” Stop-Gap budget which may be a death blow to the state’s starved public universities and social service agencies, which haven’t been paid since January.

Meanwhile the state’s past-due bills will have ballooned to $14.7 billion by June 30.

As the 2018 elections come into focus, it may get harder for lawmakers to come to compromise during campaign season. If the state cannot pass a budget for another year, the bills backlog will be close to $28 billion when the new lawmakers and governor take office in 2019. That’s an unappetizing thought that may bring both sides to pause the food fight and choke down the meal.

“We’ve all known all along that we have to deal with both sides of the ledger, in revenues and spending to actually come up with a balanced budget,” said State Sen. Heather Steans (D-Chicago) at a May 31 press conference. “I really urge the duelers here to put down their swords and come to the table and negotiate in good faith.”

“The cost of chaos is something you can’t manage,” said Sen. Toi Hutchinson (D-Olympia Fields). “That’s what this right now, chaos. We are all trying to manage chaos, and time’s up.”