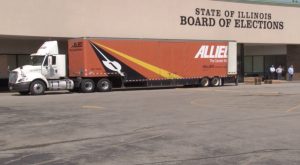 A semi truck containing almost 600,000 citizen signatures was delivered to the Illinois Board of Elections in Springfield by Independent Maps in early May. (Photo courtesy: Independent Maps)

The Independent Maps group announced May 24 that they had passed a signature inspection by the Illinois State Board of Elections that moved the proposed redistricting amendment one step closer to the November ballot.

A review by the ISBE May 23 declared the group likely had the minimum of 290,216 valid signatures of registered voters.

“The ISBE review projected that nearly 73 percent of the 563,974 petition signatures appear to be genuine and match the signature of a registered voter living at the address printed on the petition,” a statement from Independent Maps said. “The staff checked 28,199 signatures selected at random by computerized sampling of 5 percent of petition signatures.”

To show support, members of the League of Women Voters from several towns across Illinois traveled to Springfield to wait for the decision.

Dennis FitzSimons, chair of Independent Maps, said the remap reform amendment had support throughout the state and called the petition collecting done by state volunteers a “massive undertaking.”

“The huge number of petition signatures is yet another sign of the strong statewide support for an independent, transparent, and impartial process for drawing state legislative maps,” FitzSimons said in a statement on the group’s website.

Earlier in the month, an opposition group filed a lawsuit asking judges to stop the inspection process calling it a “waste of public funds.”

Every 10 years after the U.S. Census, state legislative boundaries are redrawn in Illinois based on new population numbers. In Springfield, depending on the party in the majority, state legislators have stretched district boundaries to gain more voters for their party, or even zone competitors out of their own districts.

The Independent Map Amendment seeks to have the Illinois Supreme Court appoint a panel of 11 map makers, selected by lottery after being vetted and after public meetings to collect input.

Critics say this new approach is undemocratic and may endanger minority voting blocks, which could dilute the strength of minority representation in Springfield.

Even though it failed to get a temporary restraining order to stop the signature count, the suit is still alive, and critics continue to assert that the Supreme Court is the wrong body to appoint the panel.

“The proposal calls on unelected and unaccountable commission members to craft maps. When one of the criterion needed to craft maps competes with another, one will lose out,” said People’s Map Chairman John T. Hooker in an email to the Chronicle.

The suit is still alive, even though it failed to get a temporary restraining order to stop the signature count. The suit continues to assert that the Illinois Supreme Court is the wrong body to appoint the map-making panel and that these changes aren’t legitimately allowed in the Illinois Constitution.

The suit was filed by Chicago Election attorney Michael Kasper, an ally of House Speak Democrat Michael Madigan, who has used district mapping to create a powerful majority in the General Assembly.

“We will aggressively defend the constitutionality and fairness of the Independent Map Amendment, and we are determined to give voters that choice in November,” FitzSimons said May 24 in a statement.

If Independent Maps succeeds in staving off the lawsuit, the next step will be a pamphlet, sent to every registered voter in Illinois explaining the process.

Right now, the Illinois Constitution only says legislative districts must be contiguous, compact and have equal population. Independent maps aims to add new rules: Districts must be drawn to group together units of government and “communities of interest.” Boundaries must reflect minority representation. Maps can’t be drawn based on who’s in power, or wiggled to re-district a candidate out.

If the amendment survives the legal challenge and appears on the ballot, voters must approve it by 60 percent in November to make the new change into law.

The current mapping process has been called an “incumbency protection policy.” Independent Maps says with more impartially drawn districts, there will be more choice at the ballot box. Supporters say the reformed map procedure will attract more candidates for the General Assembly. The group also says a process created with lots of public input will “allow the public to view and participate in redistricting.”

“Illinoisans deserve legislative elections where issues are debated, candidates listen to their constituents and voters have choices,” said FitzSimons.