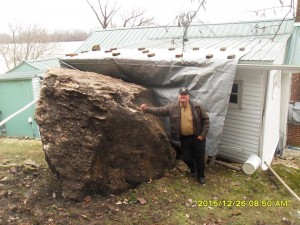 Gov. Bruce Rauner declared the entirety of the Metro-East a disaster area last week, after records rains produced the worst flooding in a decade – and in some cases the worst ever – along the Mississippi River and its tributaries.

St. Louis-area communities experienced record-level rainfalls of 6-to-12 inches over the week.  The Mississippi River was expected to crest at 43.7 feet Thursday (Dec. 31) with the river reaching “major flood” levels at all reporting stations in the Metro-East, according to the U.S. Geological Survey.

Water levels are expected to drop below flood stage around the area late this week.

The district is currently launching the third phase of a multi-million dollar levy upgrade, undertaken after the Federal Emergency Management Agency threatened to de-accredit the levy system due to potential problems with seepage.

However north and south of the Metro-East levee system, some communities are experiencing conditions comparable to the St. Louis area’s infamous flood of 1993. 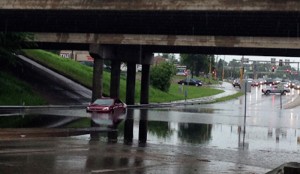 This kind of scene was all too familiar across Central Illinois Dec. 29 in the aftermath of a winter ice storm driven by high winds. Tree and power line damage as in addition to flooding was widespread. (Photo from ready.Illinois.gov)

The worst flooding and damage are anticipated in Randolph County, downstream from the confluence of the Mississippi and the Kaskaskia River.  There, river levels were forecast to exceed those of the St. Louis area’s infamous 1993 flood – which meteorologists have classified as a “500 year” flood with water levels that could be expected on average only twice in a millennium.

In Chester, the maximum security Menard Correctional Center was placed on lockdown, with all visits cancelled, supplies stockpiled, and some inmates relocated.

Just to the north, the historic community of Kaskaskia – once the capital of the Illinois Territory – faces a perhaps existential threat.  Inundated in 1973 and again in 1993, the tiny island with a population of 14 has been eroded by previous flooding and might now be permanently abandoned, according to some officials. It is accessible only by a bridge from Missouri, currently closed to traffic.

In Missouri, the flood-prone community of West Alton (population: 522) was evacuated early last week, as waters overtopped the CNC levee, inundating much of the massive floodplain at the confluence of the Mississippi and Missouri rivers.  The flooding forced the closing of the southbound lanes on U.S. 67, a major corridor between North St. Louis County and Madison County, and on Alton’s Clark Bridge.

Across the Mississippi, most of Alton is protected by the area’s steep river bluff; however, sandbagging was undertaken to protect some sections of downtown and some business have temporarily relocated. The Mississippi River was projected to crest Thursday at Alton’s Melvin Price Locks and Dam, at a level of 43.7 feet, the second highest on record. The annual Alton-Audubon Eagle Fest was canceled due to flooding.

In riverside community of Grafton, where the Mississippi crested at approximately 31.8 feet last Wednesday (Dec. 30), police continued to search last week for a 42-year-old woman who was last seen near the flood waters on Dec. 26.

Many of the worst flooding problems in Metro-East have occurred beyond the floodplain, as streams and tributaries have back-up, unable to empty their waters into the Mississippi.  St. Clair County has requested some 50,000 sand bags from the state for use along tributaries.

In Pontoon Beach, backed-up stream water – up to five feet deep — and power outages forced the evacuation of about 400 residents in the Village Green area – many by boat.

In Mascoutah, a school bus and a tractor-trailer were swept off Ill. Route 161 into a retention pond at N. County Road, south of Scott Air Force Base.  The Mount Vernon School District bus carried 12 students and four adults.  No one was injured.

The Illinois Department of Transportation reports at least 27 roads or bridges were closed for varying periods as a result of the flooding in Metro-East.  Among them