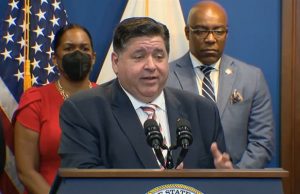 Gov. J.B. Pritzker, along with Lt. Gov. Juliana Stratton and Attorney General Kwame Raoul, announce plans for distributing funds from the state’s share of a $26 billion settlement with opioid manufacturers and distributors. (Blueroomstream.com)

SPRINGFIELD – Gov. J.B. Pritzker and Attorney General Kwame Raoul announced plans Friday, July 29 for how the state will distribute its share of funds from a national settlement with opioid companies.

“The opioid crisis will go down as one of the most disturbing examples of corporate greed and medical mismanagement in human history, giving way to an epidemic that has become more deadly almost every year of the last 40 years,” Pritzker said at a news conference in Chicago.

Under an executive order that Pritzker said he would sign July 29, the money will flow through a new Office of Opioid Settlement Administration to be set up within the Illinois Department of Human Services.

That agency will also appoint a Statewide Opioid Settlement Administrator to ensure that the funds are used in accordance with the State Overdose Action Plan, which Pritzker announced earlier this year, and that they are used to fund recovery and treatment programs in the counties and municipalities with the most urgent need.

Allocation of funds will be based on recommendations from a newly created advisory board, chaired by the state’s chief behavioral health officer and made up of state and local appointees. The board will work with an existing state opioid steering committee led by Lt. Gov. Juliana Stratton and the state’s directors of the Illinois Department of Public Health and IDHS.

“This crisis has reached into urban, suburban and rural areas, every kind of community,” Stratton said at the news conference. “It’s also true that opioids have disproportionately hurt BIPOC (Black, Indigenous and people of color) communities. In fact, in Illinois alone, the opioid fatality rate for Black communities was 55.3 per 100,000, and that is the highest of all demographics.”

The settlement, which was first announced in July 2021, resolves more than 4,000 lawsuits that were filed across the country by state and local governments against the drug companies.

In Illinois, Raoul said, 94 counties and 77 municipalities have signed on to the agreement. Terms of the settlement spell out what percentage of the proceeds each community will receive, and they require that at least 85 percent of the funds be used for programs that will help address the ongoing opioid crisis through treatment, education and prevention efforts.

Raoul noted that the state stands to receive even more money in the future from other national cases. He said Illinois is part of a national settlement to resolve opioid claims against drug manufacturer Mallinckrodt. That settlement was finalized in a bankruptcy plan that took effect last month and will bring about $36 million to Illinois over nine years.

Raoul also announced last week that state attorneys general have reached settlements in principle with drug manufacturers Teva and Allegan that will bring as much as $6.6 billion of additional relief to states and local governments nationwide.