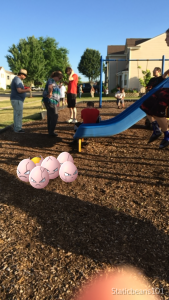 Kids and adults congregate at a Pokestop in a Marengo, Ill. park to catch an Exeggcute. (Photo by Quentin Blais)

Pokémon Go has become the most popular mobile-phone game in history. But some roaming Pokémon players are putting themselves and others at risk.

Dave MacDonna, spokesman for the Illinois Department of Veterans’ Affairs, said the distracted driving of the players could lead to serious accidents.

“We’ve had several reports coming in of distracted drivers coming onto our grounds. Our veterans’ homes are basically long-term care nursing homes.”

MacDonna said is worried that a distracted Pokémon player could end up injuring himself, a VA employee or a patient. He said the department has been working with Nintendo, the originator of the game, to get the VA homes removed from the game.

The Illinois National Guard released a statement Friday telling players that they are not allowed on the premises after several people approached gates asking for access.

In a statement, Exelon, which also owns power company ComEd, said, “To date, Exelon has not experienced any issues with Pokémon Go players attempting to access its facilities. Exelon Generation nuclear energy facilities have outer “owner controlled areas” that are clearly marked and inner “protected areas” that are perimeter fenced. ComEd locations are also well marked, and ComEd regularly reminds customers to stay safe and avoid utility power lines, poles and other equipment.”

The game sends the player outdoors in search of Pokémon, fictional creatures from a popular video game and cartoon, to capture and fight against other players for control of geographic markers called “gyms.” Players choose one of three “factions” when they start and play to assert their faction’s control over the locations.

Pokemon Go players popping up all over at all hours