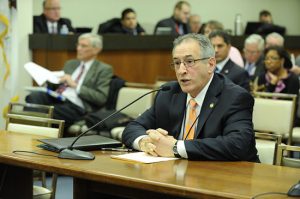 Members of the General Assembly are trying to purge around 200 employees of professional associations who have no taxpayer oversight but are still eligible to contribute to, and collect from, the state’s Illinois Municipal Retirement Fund.

“This is one of the flaws in the pension system,” said sponsor State Rep. Dist. Marty Moylan (D-55th, Des Plaines). “Everybody thought this was an endless pile of money and they jumped on it.”

HB 4259 cleared the House on April 14 and was referred to the assignment committee in the State Senate. The bill’s chief co-sponsors are House Republicans David McSweeney (52nd, Cary) and Grant Wehrli (41st, Naperville).

“This is a reasonable bill that insures that only public employees are receiving public pensions,” McSweeney said.

Moylan cites the example of the nine-employee Illinois Association of Park Districts as an organization whose members shouldn’t be in the state pension system. The not-for-profit lobbying and education group has been around since 1928 and supports member-park districts and forest preserve districts.

But the group has come under fire for loading up executive salaries and “abuse of taxpayer money.”

IAPD Executive Director Peter Murphy, 64, of Springfield, earned $352,383 in pension-eligible income in 2015. Numbers obtained from the IMRF under the Freedom of Information Act by www.openthebooks.com show Murphy is eligible for a pension of $225,000 per year if he retires. His predecessor hit the pension jackpot. More than $17,000 per month is collected by the former CEO of IAPD, Ted Flickinger, who retired in 2009.

“You’ve got to remember, the pension system was created to provide a modest retirement to individuals who spent their careers serving the public,” Moylan said “It wasn’t intended to make lobbyists rich.”

Murphy did not respond for comment, but IAPD spokesperson Bobbie Jo Hill said in an email, “The Illinois Association of Park Districts has no opposition to the current legislation.”

Glen Ellyn Park District board members voted Feb. 16 to withdraw from the IAPD, for which they have traditionally paid around $7,000 per year in local tax money.

“I would not renew the IAPD membership because of their previous patterns of abuse of taxpayer money by their practice of salary spiking of senior administrators prior to their retirement,” Glen Ellyn Park District Commissioner Jay Kinzler said in a statement. “This lobbying organization should not be part of the state of Illinois pension system, which is already overburdened and underfunded.”

The bill takes on some powerful lobbying groups, including the Illinois Municipal League, an association that works on behalf of local mayors and towns. Twelve IML employees participate in the IMRF. The IML has lobbied state lawmakers to weaken Freedom of Information Act regulations, and most recently to extend home-rule to every Illinois town with a population over 5,000.

“We’re not afraid of them,” Moylan said. “We’re taking them on. We’re going to push for this real hard.”

Brad Cole, executive director of the IML and former mayor of Carbondale, earned $239,131 in 2015 pensionable salary, according to the IMRF records.

“We are not opposed to the bill,” Cole wrote in an email.

The new proposal revives part of the December 2013 pension reform bill signed into law by Gov. Pat Quinn, but later thrown out by the Illinois Supreme Court.

Moylan said the new bill seeks to stop the bleeding from 12 different lobbying and professional organizations, which are not technically government employers.

Other lobbying and nongovernmental organizations that would be purged from the pension rolls include the Illinois Supervisors, County Commissioners and Superintendents of Highways Association, two township employee associations, and the Special Olympics.

The bill would seek to stop IMRF participation for employees after Jan. 1 2016.

Of the state’s five retirement systems, the IMRF is the most healthily funded because yearly payments are mandated by the state, not up to the decision of elected officials. The total pension hole in Illinois is $111 billion in unfunded pension liability, according to the December 2015 report of the General Assembly’s Commission on Government Forecasting and Accountability.

“[This bill] is not going to solve the pension crisis, but it’s going to save millions of dollars,” Moylan said.