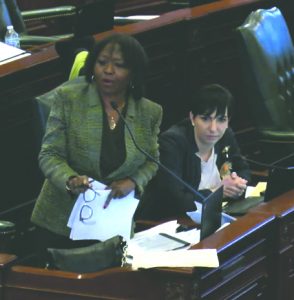 State Rep. Mary Flowers (standing, D-Chicago) talks about the importance of establishing birthing centers in rural parts of the state, an effort that the Illinois Department of Public Health puts at close to $1 billion. (BlueRoomStream.com)

A state representative from Chicago wants to act on behalf of women and newborns in rural parts of Illinois.

State Rep. Mary Flowers (D-Chicago) has launched a campaign to establish birthing centers to provide care to mothers during childbirth and for the mothers and their babies after the birthing process.

She noted that mothers’ deaths during childbirth are alarming in Chicago and other urban areas in the state, but “in the rural area, a lot of women are dying there as well.”

Flowers has presented legislation that requires the Illinois Department of Public Health to create and run the clinics, but the department has pushed back saying it is a regulatory agency and not equipped to operate such clinics.

“They said they didn’t want to do it because that was not their responsibility and I disagree with them,” Flowers said on the state House floor March 19, during debate on the legislation.

Republicans in the House said IDPH put the cost of creating the rural clinics at close to $1 billion.

The Chicago representative wound up pulling the measure from consideration at the urging of Republican colleague C.D. Davidsmeyer of Jacksonville, who is writing an amendment with her on another one of her bills.

“We are trying to re-create the wheel,” Davidsmeyer said of the bill as is stands. “… This instructs the Department of Public Health to duplicate services. It requires them to re-create this all over the place.”

Flowers said that there is money in the Department of Public Health currently and there will be federal money coming as well to establish rural clinics.

She said even if the rural clinics did cost $1 billion, “we are spending more than that investigating the deaths and the reason why these women and children are dying when every report that you read, every newspaper that you pick up, has two words: one is “preventable,” the other is “access.”

The representative said for deaths to occur during childbirth in this day and age is “unacceptable and unconscionable.”

State Rep. Mark Batinick (R-Plainfield) said while the intent of the bill is admirable,  “I’m not sure this is the best way to help these people — with nearly $1 billion.”

Flowers said she would be willing to start with one or two clinics in rural areas and build up from there.

RELATED CONTENT: Deaths of new mothers are on the rise in the U.S.