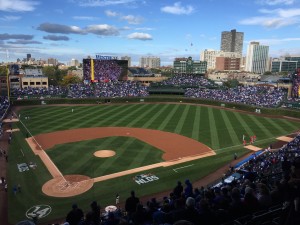 According to the Illinois State Board of Elections (ISBE) on 14 separate days between 2008 and 2015, Michael Madigan, the Speaker of the Illinois House of Representatives, wrote checks for between $33,060 and $53,597 for Cubs tickets alone. (Photo by Rick Hibbert/Chronicle Media)

The Tennessean newspaper in Nashville reported last August that over the past 12 years, seven Tennessee state lawmakers had used money from their campaign funds to purchase tickets to professional sports events.

But that’s the minor leagues compared to Illinois when it comes to spending campaign funds on tickets to professional sporting events.

To put things in perspective, Illinois House Republican Leader Tom Cross, Plainfield, (R-84th) who, coincidentally, was born in Nashville spent $33,000 on sports tickets between 2007 and 2013.

And Cross doesn’t come remotely close to being a top spender in that regard.

That distinction belongs to Michael Madigan, the Speaker of the Illinois House of Representatives, who wrote a $28,510 check in 2008, just for parking at Chicago Cubs’ games.

In all, Madigan has spent a staggering $1.6 million on pro sports game tickets over the past 10 years. That is in addition to the approximately $605,000 he spent through the 13th Ward Organization, which he controls, between 1999-2006. That’s grand total of $2.23 million, more than a third of all sports ticket expenditures reported to the ISBE.

Over the past 15 years, Illinois politicians and political funds have spent a grand total of $6.47 million on pro sports tickets (see chart).

Politics, it’s often been said, is about relationships. And gifting someone with good seats to popular sports events is clearly seen as a good way to strengthen relationship loyalty.

And Madigan’s Cellular Field primo seats (he’s a Sox fan, not a Cubs fan), which are reportedly a row of eight along the first-base line by the on-deck circle, must certainly be appreciated by those able to get them.

Two long-time observers of the Illinois political scene say the practice is troubling but not illegal.

“Getting people into major sports events as a favor is a longstanding practice,” said Dick Simpson, a former Chicago alderman who holds a Ph.D and is a long-time professor of political science at the University of Illinois at Chicago.

Simpson said back when he was in the city council, both the Cubs and the White Sox gave each alderman two tickets to games.

“We could use them for favors or for benefits,” he recalled, adding that he always gave his away.

“It doesn’t seem to me a legitimate use of campaign funds,” Simpson said. Legitimate uses, he opined, include posters and signs, mailings, radio and television advertising, and staff payroll and expenses.

But the law is open to interpretation.

“The law is pretty wide open,” said professor Kent Redfield, who heads the Sunshine Project at the University of Illinois at Springfield.

Redfield said back before the first campaign finance reform passed in the 1990s, politicians were using their campaign funds pretty much for anything they pleased.

“We had people buying houses and sending their kids to school (using campaign funds),” he said.

Redfield said that while Illinois law prohibits using candidate campaign funds for personal use, “If he buys sports tickets and gives them to someone who works in the ward, that’s perfectly fine.”

And many politicians make a practice of doing just that.

A little known elected official, Kyle Hastings, who parlayed his position as president of the tiny village of Orland Hills into a position on the State Democratic Committee, has spent $44,025 from his State Central Committeeman fund for Bears and White Sox tickets in recent years. Nearly all of it listed as “tickets for campaign workers.”

Several political PACs have taken up the practice. The Machinery Movers LU 136 Political Action & Education Fund has spent more than $70,000 on tickets in 2014 and 2015.

However legal and wide spread the practice of using campaign fund money for sports tickets may be, both Simpson and Redfield say the optics of politicians lavishing five- and six-figure amounts on supporters and staff are bad.

“When you spend your campaign money on things that look like perks …  even though they’re not illegal, they certainly increase public cynicism,” Redfield said, adding they heighten the sense “that politics is all about benefitting the politician and not the public.”