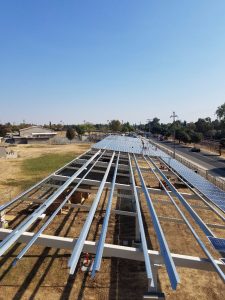 A solar panel grid that moves with the path of the sun is being proposed for the Lake In The Hills Airport. (Photo courtesy of Cenergy Power)

A solar panel grid that will be constructed on a 10-acre parcel at the southern portion of the Lake In The Hills Airport is now progressing, after the municipality’s Village Board approved a proposal from the California-based Cenergy Power, during its Dec. 14 regular session.

The company will construct and maintain the equipment at the site that is expected to generate a 2.5 megawatt output while being distributed through the Commonwealth Edison electric lines, owned by Excelon.

The company and village have agreed in principal on a 20-year lease for the solar farm, although the per-acre amounts are still in negotiation. The revenue from the lease arrangement would be directed to airport operations and other efforts.

While approved in principal, there are still hurdles to clear with federal and state regulatory agencies, as well as returning to the full board with design plans for construction permitting, and any other contingencies for review or discussion.

“They will need approval from both the federal and state environmental protection agencies, the Illinois Commerce Commission, and because of the proximity with the airport, it will require permitting from the Federal Aviation Administration,” said George Hahne, the Village’s economic development coordinator. “I had researched the initiative by reading an article on solar farms in municipalities with small airports, and then contacted the company.

“The approval process could go as quickly as 90 days, or take six months, depending on the completeness of the submitted documentation. The rental payment amount on the property lease has not been finalized, and is still under negotiations,” he said. “The company works with many municipalities, and the accompanying lease contracts.”

Cenergy Power is an alternative provider of electric power, and supplies renewable energy and “delivering unmatched value to commercial, agricultural and utility customers interested in solar photo-voltaic solutions,” according to its website. With its California offices in Merced and Carlsbad, the company has erected more than 300 grids across the country, during the last decade. 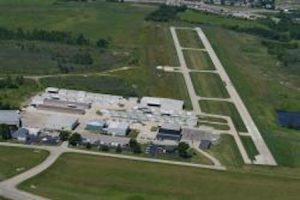 “We also looked at the advantages for our area in that village customers can partake of the electricity off the grid, along with our local businesses,” said Hahne. “There is no noise pollution generated by the movement of the panels, which follow the arc of the sun. The company will build the grid and make repairs, as needed. In the event of a breakdown, the repairs would be made within a two-day period.”

Cenergy Power is also absorbing the cost of conducting site engineering and feasibility studies for the parcel, and includes quantitative and qualitative research methods on glare reflection. The company must apply to ComEd for electrical interconnection, and gain approval.

Some economic assistance could be obtained from the Illinois Power Agency Procurement Program, which was established for the project size proposed at the Lake In The Hills Airport, likewise necessitating their approval and placing a ceiling on the amount of electricity produced by the panels.

One drawback could be FAA intervention with the airport’s layout design plan, from 14 years ago, that would demand a new plating and changes, due to the parcel’s change in how it is purposed.

“This is still a process, and once everything is approved, then it goes back to the Village Board for final approval, perming, and plan design,” said Hahne. “They are currently working with other municipalities that have airports. Actually, this entire operation could be up and running within one year.”