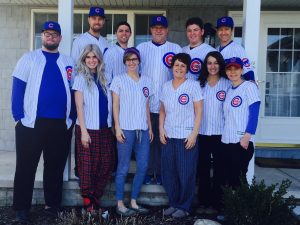 A photo of Ben Zobrist, parents Tom and Cindi Zobrist, wife Julianna and his four siblings and their spouses all bedecked in Cubs pinstripes would have been inconceivable five years ago. (Photo courtesy of Tom Zobrist)

Blood is thicker than water or old-time team loyalties. When Ben Zobrist, the pride of Eureka, took his place in the middle of the World Series-panting Cubs lineup, the affections of a close-knit family and some of their friends reversed course on I-55.

And that 180-degree turn is in keeping with Cubs-Cardinals tradition, in which Hall of Fame-caliber players have become turncoats via trade or free agency. Players who looked so familiar in blue or red change colors because, well, that’s baseball. Derrick May, former Cubs power prospect hopeful, vintage 1990, just completed his coaching rise through the Cardinals’ system to the parent club’s field staff.

Fans make such switches seemingly less frequently. Then, again, few have a son who grew up a Cardinals fan signing a big free-agent contract as a Cub. 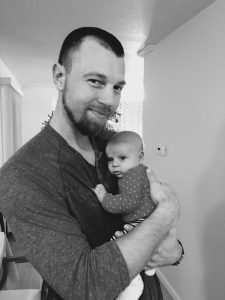 “Your favorite team is the Cardinals and your second-favorite team is whoever is playing the Cubs. You’ve heard that before. It’s kind of like the Bears playing the Packers.  It’s really kind of ironic in maybe it’s the Lord’s sense of humor that now I’m like a Cubs fan.

A recent photo of Ben Zobrist, parents Tom and Cindi Zobrist, wife Julianna and his four siblings and their spouses all bedecked in Cubs pinstripes would have been inconceivable five years ago.

Baseball indeed makes strange bedfellows. Families are split between Cubs and Cardinals fans all throughout central Illinois. For example, 600-homer slugger Jim Thome’s family in the Peoria area was pro-Cubs — except for brother Randy, termed the “black sheep” as a Cardinals fan.

Despite a fair representation among Zobrist relatives, the immediate bloodline coursed Cardinals red.

“My dad was a Cardinal fan,” Tom Zobrist said. “My grandpa used to tell me you should go for your home state. I was just whatever my dad was.

“The first picture of him, he was less than a year old, and he had a baby Cardinals hat on his head,” said Tom Zobrist. “His favorite player was Ozzie Smith. He never went to Wrigley Field. He always went to Busch Stadium. His first time at Wrigley Field was two years ago when the Rays made a stop there.”

Even though Ben Zobrist was drafted by the Houston Astros in 2004, he still had hopes of joining the Cardinals organization. A St. Louis representative called his home on that year’s Draft Day. He was informed the Cardinals looked to draft him around the 10th round.  The secretive Astros, not at all on the family’s radar, trumped sentimentality by selecting Zobrist in the sixth round out of Dallas Baptist University.

As late as the post-game celebration of  last year’s World Series, when Zobrist got his first ring playing with the Royals, the Cardinals were still on his mind as he considered free-agent options. 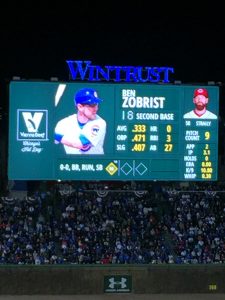 Ben Zobrist has been a contributor to the Cubs success so far in the 2016 season. (Chronicle Media photo)

The deciding factor finally cutting the younger Zobrist’s cord with the Cardinals was Joe Maddon’s presence in Chicago and the dramatic improvement to 97 wins under the direction of the colorful manager. Maddon had been so instrumental in Zobrist’s career in Tampa Bay, where he enjoyed three seasons of at least 20 or more homers and a reputation as one of the game’s most versatile players.

But while the Cardinals were Zobrist’s baseball center, he always loved Chicago. The family made an annual Christmastime shopping and sightseeing trip to the city’s downtown. Zobrist enjoyed his trips to Chicago as a visiting player.

Now, the Zobrist family can drive to see their baseball scion play in Chicago, St. Louis, Milwaukee and Cincinnati rather than hopping a plane to Tampa. Tom Zobrist now can have an excuse to see stadiums all throughout the National League he had never attended while his son played in Tampa.

But like a lot of his new life, the No. 1 stadium and city would have never crossed his lips until recently.