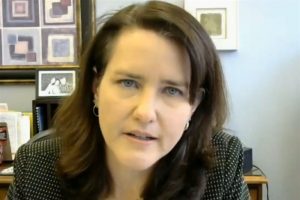 Alexis Sturm, director of the Governor’s Office of Management and Budget, briefs a legislative panel on how the state has used the $3.5 billion in federal funds it received for combating the COVID-19 pandemic. (Blueroomstream.com)

SPRINGFIELD – The head of Gov. J.B. Pritzker’s budget office said this week that the state of Illinois is on track to spend all of the money it received through the federal CARES Act by the Dec. 30 deadline.

That means it is unlikely the state will have to repay any of the funds to the federal government, but whether or not Congress approves any additional funding remains an open question.

Alexis Sturm, director of the Governor’s Office of Management and Budget, told a legislative oversight panel that of the $3.5 billion the state received in April, a little less than $1.5 billion remains unspent. But she said state agencies have spent money out of their own budgets for COVID-19-related expenses that can be reimbursed with the federal funds.

“And that should be enough to … expend the balance of those funds,” Sturm told the Restore Illinois Collaborative Commission, a legislative group that has been meeting monthly since July to monitor the state’s COVID-19 response.

Congress passed the $2.2 trillion Coronavirus Aid, Relief and Economic Security Act in late March. It included financial aid to state and local governments to help cover their costs for responding to the pandemic.

In addition to the funds that went into state coffers, the city of Chicago along with Cook, Kane, Lake and Will counties, which all have populations over 500,000, received direct aid of their own, for a total of roughly $4.9 billion that came to Illinois.

Congress stipulated, however, that the money could only be used for expenses directly related to COVID-19 response efforts and not to make up for revenue shortfalls due to the pandemic. The law also requires that all of the money be spent on costs that are incurred on or before Dec. 30.

When lawmakers came back for their abbreviated session in May, they established a framework for spending the remaining funds in the fiscal year that began July 1. By that time, about $3.1 billion of the CARES Act money remained.

Since then, the Pritzker administration has set up a number of grant programs that have been funded with CARES Act money. Those have included the Business Interruption Grant, or BIG, program for businesses that were forced to close or reduce operations during the initial stay-at-home order, a separate BIG program for child care facilities, financial aid for homeowners and renters, and a reimbursement program for local governments to cover their COVID-19 expenses.

The BIG program received $270 million, of which $168 million has been paid out to more than 6,300 small businesses across the state, according to the governor. The grant application process will close Tuesday, Dec. 15, and information can be found at Illinois.gov/dceo.

The program for local governments, known as the Local Coronavirus Urgent Remediation Emergency, or Local CURE program, is one area where the state has had difficulty finding applicants. During his daily COVID-19 briefing Thursday, Dec. 10, Pritzker noted that only $147 million of the $250 million available had been paid out so far. He said that money went to 688 cities, towns, counties and local health departments.

“However, hundreds of local governments have yet to take steps they need to register for this program and we encourage them to do so soon so that together we can ensure that no federal dollars are left on the table and every community has access to economic support,” he said.

In addition, Sturm said, agencies throughout state government have incurred costs for additional cleaning and sanitizing of facilities, overtime costs, workspace hazard mitigations such as setting up plastic shields, purchasing PPE for employees and buying equipment so employees could work remotely.

Meanwhile, however, the COVID-19 pandemic has not abated, and in fact the entire country is going through another surge of the disease that has been more severe than the initial wave in the spring, but Congress so far has been unable to agree on another relief package.

One bipartisan group in Congress recently unveiled a compromise plan that included some financial aid for state and local governments, a top priority for Democrats, as well as a limited liability shield to protect businesses from lawsuits by employees who contract the disease, a top priority for Republicans.

Continuing talks over that proposal, however, so far have not produced a deal, opening the possibility that no additional federal aid will be forthcoming at least until President-elect Joe Biden’s administration takes office in January.

Asked during one of his recent daily briefings whether such a delay would hamper the state’s response efforts, Pritzker said Illinois probably has enough PPE stockpiled to last about 60 days while local health departments have enough for about 30 days.

“At least at the PPE level we, I think, have a pretty good situation. We think that that will hold us for now,” he said. “But we do think the federal government is going to have to step up. Look, there’s also going to be money needed going forward for vaccine distribution. There’s some available now but this is going to go on for some time now.”