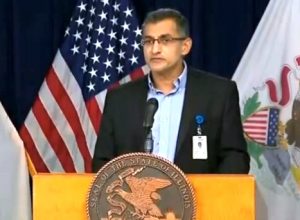 The 168 COVID-19 related deaths reported Thursday made for the third-highest one-day total since the pandemic began. That brought the total death toll to 11,178 among 621,383 confirmed cases out of 9.4 million test results reported.

That came as hospitalizations for the virus surpassed 6,000 for the first time since the pandemic began with 6,037 COVID-19 patients in hospital beds at the end of Wednesday. That marks 25 straight days of increasing hospitalizations, while 29 percent of hospital beds remained open statewide.

Intensive care bed and ventilator usage for the virus each blew past second-wave highs as well, with 1,192 and 587 in use, respectively. Approximately 30 percent of ICU beds and 71 percent of ventilators remained unused at the end of Wednesday, Nov. 18.

“Tomorrow will be the first day of our statewide Tier 3 mitigation efforts. Outside of things you have to leave home for like school, work and groceries, we’re asking everyone to stay home as much as you can,” Gov. J.B. Pritzker said at his daily briefing Thursday, Nov. 19 in Chicago. “This is a temporary thing that we can do to reduce the spread of this virus in our communities. That will give our health care workers some relief and ensure that there will be hospital beds and doctors and nurses available for emergencies.”

The statewide seven-day average case positivity rate increased slightly from the day prior to 12 percent, remaining more than a point below its Nov. 13 high of 13.2 percent. The one-day positivity rate on Thursday, Nov. 19 was 12.9 percent, which was the fifth highest single-day number of the virus’ second wave.

Eight of the state’s 11 COVID-19 mitigation regions saw the same or lower positivity rates from the day before as of Monday, as that data lags three days behind the current day.

“We continue to see concerning trends statewide in our hospitalization data, but in the most recent two or three days, we’ve seen a hint of leveling in new cases and positivity rates in most of our regions,” Pritzker said. “It’s too early at this point to determine if this stabilizing of the average is a meaningful trend or an anomaly, but we’re glad to at least have a pause in our upward movement.”

“My fear is that the number of cases, hospitalizations and deaths will spike even further in the weeks after Thanksgiving, because people spent that holiday together, mixing households,” she said. “I don’t want anyone to have to look back and say, if only we didn’t have people over for Thanksgiving, such-and-such, so-and-so, might still be here for New Year’s.”