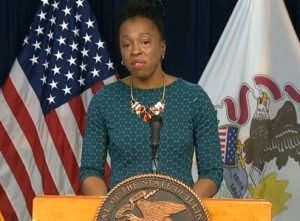 SPRINGFIELD – As the state surpassed 11,000 COVID-19-related deaths Wednesday, Nov. 18 and the disease became the third leading cause of death in the state, health officials sought to address rumors and conspiracy theories related to the virus.

“I still hear people saying that COVID-19 isn’t real, that it’s just another cold or that it’s a conspiracy,” Illinois Department of Public Health Director Dr. Ngozi Ezike said at Wednesday’s daily COVID-19 briefing. “The bottom line is that COVID-19 is real. And it is worse than a typical cold. This ‘not real virus’ is overwhelming our hospitals. Right now, it’s taking up one out of every four beds that’s occupied in the hospitals across our state. This ‘just another cold’ is putting hundreds of people in the ICU and on ventilators.”

The 140 deaths reported Wednesday, Nov. 18 in people that had tested positive for the disease drove the total to 11,014. It’s the third time one-day death counts surpassed 100 in the past eight days. The newly reported deaths included people aged from their 30s to their 100s.

“I’m also hearing people say that it’s only older people or those with health conditions who are dying from the virus,” Ezike said. “Well, it is true that people who are older and people who have comorbidities are at higher risk. But I will tell you that of the 140 new reports of deaths that we’ve gotten, two of them were their 30s, three were in their 40s, nine were in their 50s. The populations at greater risk are our elderly. But I believe that the death of a 90 year-old or a 50 year-old or a 20 year-old all matter.”

On Oct. 26, the state warned that the death toll could reach 11,000 by the end of the year — a number that was hit less than one month later. On Nov. 18, the state said models project between 17,000 and 45,000 additional deaths in Illinois between now and March 1 without increased mitigations.

The virus is behind only heart disease and cancer as leading causes of death in the state, and the death rate is twice as high in rural areas than it is in metropolitan areas, according to the governor’s office.

Gov. J.B. Pritzker said Wednesday that health care workers remain in short supply and there “is a limited number” of qualified professionals statewide and nationally.

“You can’t just snap your fingers and find staff when the whole country is going through this COVID storm,” he said. “There were times over the last eight months when certain states were doing better than other states. And, therefore, you could perhaps draw some staff from the states that were doing better. Now, really very few states – and certainly when you look at all the states in the Midwest, their hospitals are overflowing.”

Pritzker said good will toward hospital workers seen in the first wave of the pandemic seems to be dissipating, and he blamed “conspiracy theories, right wing political ideology or naivete” for people believing the virus is a “hoax.”

“Remember, last spring when hospital workers were loaded with gifts of free pizza and cheers at the grocery stores, and pots and pans banging in unison at 8 o’clock at night?” he said. “Well, hospital leaders tell me that that’s all come to a grinding halt.

“Now health care workers are experiencing verbal assaults by people who come to the hospital suffering from COVID-19. Since last spring, the divisive and misleading rhetoric of the outgoing president of the United States seems to have implanted a false narrative in the minds of a loud minority of Illinoisans.”

The statewide positivity rate decreased to 11.9 percent on a rolling seven-day average Wednesday, while the one-day positivity rate was 8.6 percent as the 8,922 cases reported marked the lowest total since Nov. 4.

Eight of the state’s 11 COVID-19 mitigation regions saw their positivity rates lower or remain the same from the day prior, while three saw their numbers increase slightly.

While Pritzker said he was somewhat optimistic about the numbers, more data was needed before it could be viewed as a slowdown of the virus’ spread.

“The numbers fluctuate a little bit. So yes, I looked at it in the morning, and I saw these numbers today, it’s less than 10,000 cases less than 9,000, in fact…with 103,000 reported specimens… That’s a terrific number. But again, I don’t want to draw any conclusions until we see more days,” he said.