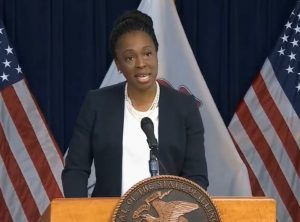 Illinois Department of Public Health Director Dr. Ngozi Ezike talks about the allowance of all youth sports in Regions 3, 5 and 6 during a news conference Friday, Jan. 22 in Chicago. (blueroomstream.com)

SPRINGFIELD – All high school sports — including the higher-risk football, basketball and wrestling —  may now be played in three regions of Illinois as the state continues to loosen restrictions amid the pandemic.

All regions of the state had moved out of Tier 3 mitigations as of Friday, Jan. 22 as the COVID-19 health metrics continue to show improvement statewide. The three of the state’s 11 regions that have rolled back to Phase 4 mitigations are free to allow high school sports. Meanwhile, the entire state will move into Phase 1B  of its vaccine distribution plan starting Monday, Jan. 25.

Illinois Department of Public Health Director Dr. Ngozi Ezike and Gov. J.B. Pritzker made the unexpected announcement about high school sports during a news conference in Chicago on Friday.

All youth sports at the conference and intra-region levels will be allowed in regions that are in Phase 4 of the Restore Illinois plan, Ezike said.

“With all regions of Illinois now out of Tier 3, we can now see that the entire state is headed down the right path,” Ezike said. “During the summer, we were on this same path. We know that we must continue to take precautions and be smart about how we relax some of the mitigation measures, which are in place to protect our health and safety.”

Region 4 in the Metro East area near St. Louis was the last region to advance to Tier 2 mitigations effective Friday. Region 8, which includes Kane and DuPage counties west of Chicago, Region 9 in the north suburbs, Region 10 in suburban Cook County and Region 11 in the city of Chicago remain under Tier 2 mitigations.

But if metrics continue, Regions 10 and 11 are on track to advance to Tier 1 on Saturday, where indoor dining is allowed with limited capacity.

Region 1 in northern Illinois, region 2 in north-central Illinois and region 7 in south suburban Chicago are already under Tier 1 mitigations, and thus may allow indoor dining at 25 percent capacity and bar service only if food is being served.

In order to move out of tier mitigations, regions must meet certain metrics of case positivity, have staffed intensive care unit bed availability greater than 20 percent for three consecutive days and sustained decline in hospitalized COVID-19 patients on a seven-day rolling average. 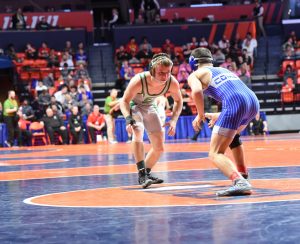 Although Pritzker said he is pleased with the progress of the state, health officials warned that a new variant of COVID-19, which originated in the United Kingdom and has been detected in Illinois and other areas of the United States, could become the dominant strain by March.

“The risk of a resurgence in Illinois, particularly with extremely contagious new variants, is serious,” Pritzker said. “Our ability to have limited indoor restaurant service and to restart youth sports could be cut short if we aren’t extremely careful.”

While all regions have transitioned out of the strictest Tier 3 mitigations, health officials are keeping an eye on numbers, and Ezike confirmed that increased restrictions could be likely if cases and hospitalizations creep back up to mitigation-triggering criteria.

Phase 1B of the state’s vaccine distribution plan, which includes non-health care essential workers, residents over the age of 65 and inmates, begin statewide on Monday, Jan. 23 by appointment only.

“So don’t try to line up at your local store or call your local pharmacy,” Pritzker said. “When we have a steady stream of vaccines coming in from the federal government, we will launch walk in locations and round the clock operations.”

The Illinois National Guard mobile vaccination teams have begun operations at six vaccination sites in Cook County. Pritzker said over the next three weeks approximately 25 additional vaccination teams are deploying in high-need areas across the state, in addition to the sites that were announced last week in St. Clair County. 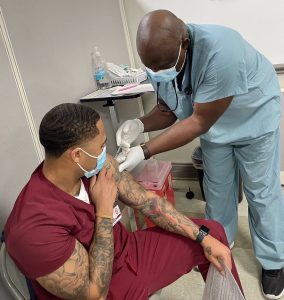 An EMT gets his COVID-19 vaccination on Jan. 22. The state’s vaccine distribution plan expanded this week to include non-health care essential workers, residents over the age of 65 and inmates. (illinois.gov)

As of Thursday night, Jan. 21, more than 1.4 million total doses of the Pfizer-BioNTech and Moderna vaccines had been delivered to the state of Illinois. Of those doses, 922,235 doses had been delivered to providers across the state, including Chicago, and 524,050 doses have been allocated to the federal government’s Pharmacy Partnership Program for long-term care facilities.

IDPH reported a total of 616,677 vaccines have been administered, including 93,683 for long-term care facilities. The seven-day rolling average of vaccines administered daily is 24,190 doses.

But he expressed frustrations with the slow pace of the federal government’s pharmacy program for long-term care facilities under former President Donald Trump’s administration.

“I have expressed that concern to the Biden administration, and to the pharmacy partners,” Pritzker said. “They must accelerate the pace of vaccines to our most vulnerable residents.”

The state is expecting 126,000 first doses of the COVID-19 vaccine to arrive this week, outside the city of Chicago, which adds up to less than 4 percent of the eligible Phase 1B vaccine population, Pritzker said. There are 3.2 million Illinoisans that are eligible for the vaccine in Phase 1B.

“Until the vaccine supply improves, we will all, frankly, need to be patient,” Pritzker said.

IDPH reported 7,042 new confirmed and probable cases of COVID-19 Friday, and 95 additional deaths. In the previous 24 hours, 125,831 test results had been reported for a total of 15.2 million since the pandemic started.